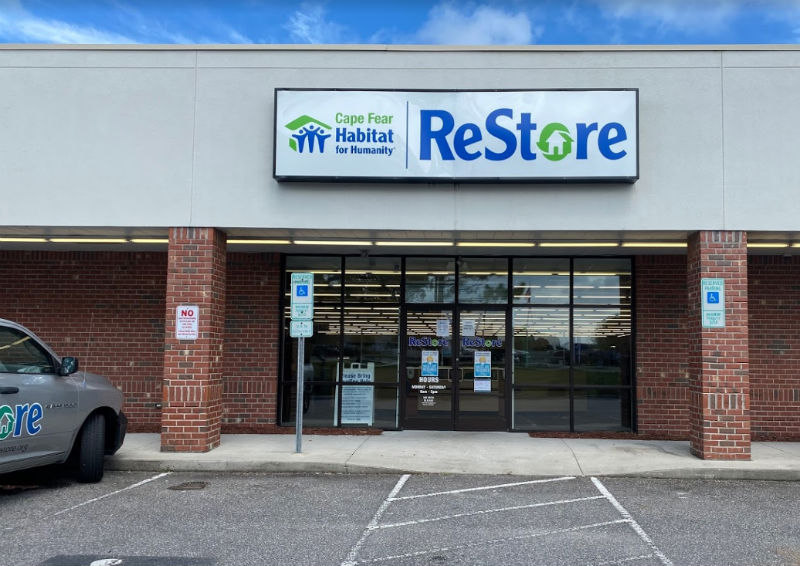 “We are constantly doing research and hearing from customers at our existing stores as to where they would like to see another store,” said Steve Spain, executive director of Cape Fear Habitat for Humanity. “The Monkey Junction area choice was obvious: Riverlights, south of Monkey Junction, has been growing exponentially in terms of residential units.”

Local Habitat officials found a space to lease at 6331 Carolina Beach Road, south of the junction of Carolina Beach Road and South College Road. The choice of a site in the southern part of New Hanover County – where there is sufficient population to donate and buy merchandise – was deliberate, Spain said.

“Both of our existing stores [on South Third Street downtown and on Market Street in Ogden] have been very successful,” he said.

The new outlet debuted July 11, not long after Habitat’s downtown and Ogden ReStores reopened after their COVID-19 shutdown.

There were challenges in designing and fitting up the new store in the midst of the COVID-19 restrictions, Spain said, but his organization was grateful to have found an available space. Cape Fear Habitat would like to have a larger, permanent location in the same area, however.

He anticipates that the ReStore will remain in its current spot for the next two tot hree years, but Habitat is negotiating on the purchase of vacant land nearby. That site would allow the organization to build a much larger facility.

ReStores serve a three-fold purpose for Habitat, the executive director explained, likening their benefits to a three-legged stool.

“The stores bring in funds to enhance our mission of building and financing homes, but they serve a mission in themselves to make household goods, building materials and supplies available at affordable prices,” he said. “And the third leg of the ReStore stool is keeping items out of the landfill. It’s making the connection between someone who has something they would like to give away and someone who needs it.”

“We now offer internet sales, putting higher-end items online for people interested in name-brand goods,” he said. “It’s also one of the ways we’re trying to accommodate people who can’t or don’t want to wear a mask in the store.”

The new ReStore Online has been a platform for some items that would in normal times have been part of Habitat’s annual Upscale Resale & Design Challenge, which had to be scrapped this fall because of the virus.

That ticketed event recruits a number of local designers, each of whom stages a small space with items they purchase and rehab from the ReStores. The merchandise is all for sale.