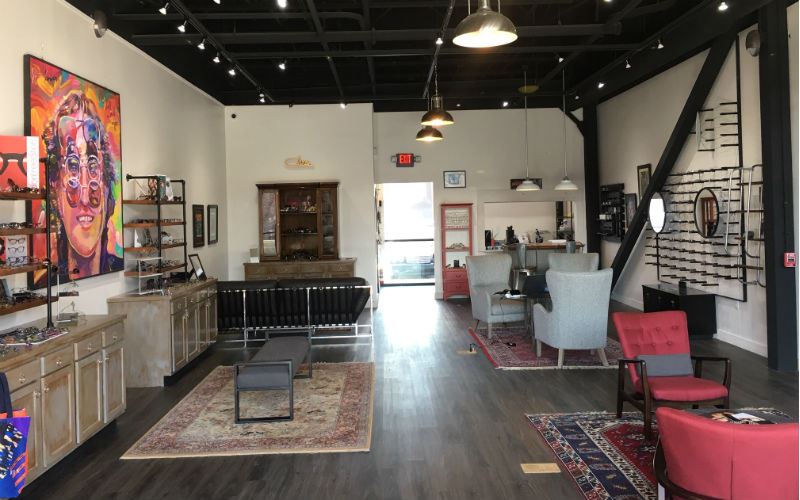 After partnering at an optical shop in Raleigh, Owen moved to Wilmington with the goal of opening his own shop and aiming to replicate the attention to customer service that made the Raleigh retailer successful.

“We were very good at introducing a lot more customer care than people normally experience when they buy eyeglasses and we were very skilled about matching them fairly quickly and easily to things that looked good and that they would get compliments on,” Owen said. “I had decided to open my own retail location so I could purchase the kind of frames artistically that I wanted.”

The shop, located at 1540 S. Second St., is in the Container Building, an eight-unit commercial structure in the district. The store had a soft opening June 30 and will have an official opening by the end of July.

Owen said he chose to open the store in the South Front District because of its easy access and architecture.

“It looked very interesting as to the design concept, kind of industrial, modern, strong and very open,” he said. “It wasn't downtown where it's so crowded and the parking is a little difficult and retail sometimes suffers.”

The CustomEyes space is made from steel and shipping containers and the interior has taken about five months to be finished.

“People complain sometimes about when they go into a doctor's office that it's wallpaper of eyewear.  . . . We've been very attentive to that desire for when you walk into a place to have it a comfortable, not even like a retail place but like a living room," he said. "It’s a very different look.”

One of the things the lens retailer will offer is unique eyeglass options, he said.

“The frame selection is very unique, and not available generally with places that are kind of limited to a standard formula of business that would be either a chain store or a doctor's office who has to rely heavily on the limits that the insurance company puts on them,” Owen said. “We have the ability to select things that nobody else will be wearing all over town that are unique and fitted exactly to your shape and coloration, which is rare.”

CustomEyes will not accept insurance but its prices will be a little less than other places to compensate for that, he said.

“It's a combination of frame selection, the expertise and kind of excitement we have about what we do when we're fitting you with eyeglasses,” he said. “The environment is a real comfortable place you'd want to hang out.”

CustomEyes joins other businesses that have recently opened in the South Front District including Beauty and Bloom, a beauty salon and floral boutique, and others that will open soon, including a second space for New Anthem Beer Project and Native Salt Cave & Wellness.

At Mayfaire, store moves in to former bevello space