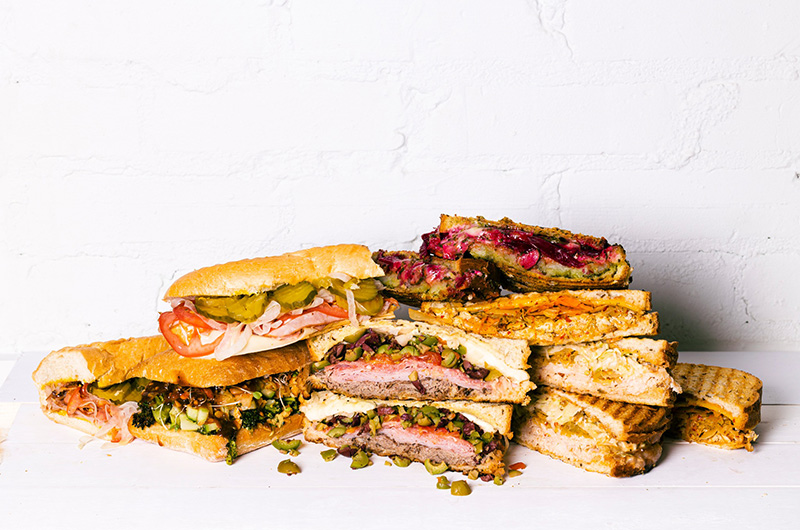 The Half, a gourmet sandwich shop and taproom in Wilmington, is expanding into Greenville with a pared-down menu of their signature sandwiches and sides at The Eighth State Brewing Company. (Photo by Matt Ray Photography/Courtesy of The Half)
After just seven months of operations in Wilmington, The Half is expanding into a second location in Greenville, South Carolina.

The gourmet sandwich shop and taproom will start serving guests from a new spot within The Eighth State Brewing Company as soon as next week. The collaboration resulted from a previous connection between the brewery’s owner and The Half co-owner Carl Cross, according to fellow co-owner Andrew Dennison.

“They expressed interest in us coming down there at some point to set up what we have in their location. It was just a really good opportunity,” Dennison said.

Cross, Dennison and Dean Moore – all veterans of the brewing and hospitality industries – worked together to open The Half in the former Detour Deli location at 510½ Red Cross St. last June. The business offers about a dozen sandwiches plus daily specials, with accompaniments including house-seasoned kettle chips, potato salad and crunchy house-fermented pickle halves.

In Greenville, The Half will operate out of the brewery’s kitchen to provide a pared-down selection of sandwiches and sides to accompany Eighth State’s beverages. The menu there will feature some of Wilmington’s best sellers alongside new options exclusive to South Carolina.

“We had some ideas that never made the cut originally, but that we still really liked and kept working on,” Dennison said of the new sandwiches coming to Greenville. “Then there are some things that we just think are cool, unique ideas that will work down there.”

Wilmington favorites soon to be sold in Greenville include the Tucker, with turkey, provolone cheese, lettuce and cucumber piled onto ciabatta and topped with balsamic and romesco, as well as the Harvey, with roast beef, Swiss cheese, house-pickled onions and slaw stacked on ciabatta slathered with tangy garlicky mustard. A handful of vegan sandwiches will round out the offerings.

As in Wilmington, The Half’s new location will slice all meat and cheese daily and prepare sauces in-house, a key component in what Dennison said sets the business’s sandwiches apart. According to Dennison, the team focuses on solid execution of simple flavor profiles with quality ingredients to deliver a balanced sandwich that hits all the right notes.

“It’s a simplistic idea that we handle very well,” he said.

Dennison confirmed the business has no further plans for expansion at this time.

“This was just the right opportunity at the right time. It was something we felt like we needed to move forward on,” Dennison said. “But as of now, going into this summer and this year, we’re looking to just concentrate on the two locations.”