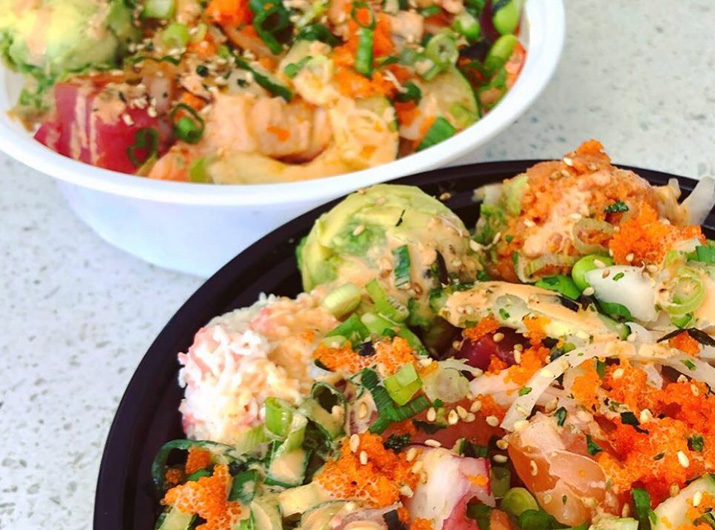 At Poki Bowl, customers can build their own poke creation by selecting a base, protein, toppings and sauces. (Courtesy of Poki Bowl)
A Hawaiian-style eatery with healthy options is coming to the old Port City Java location at 2512 Independence Blvd. later this month. Franchisee Mike Nowak said Poki Bowl will bring something new to the Port City.

“We wanted something on this side of town that provides a healthier option,” said Nowak, who along with his wife Sarah has lived in Wilmington since 2008.

Poki Bowl is a quick-service restaurant, according to Nowak, that blends the ancient poke tradition with Asian cuisine in a customizable menu.

“It’s really like build your own bowl. We like to think of it as simple yet delicious,” said Nowak.

Diners can choose sushi rice, brown rice, mixed greens, chips or a combination of those options for their base, which will be topped with a protein dressed in sauce ranging from not spicy to spicy. Crunchy toppings include avocado, cucumber, edamame, green onions, seaweed salad and sesame seeds. A drizzle of miso dressing, Poki spicy sauce or sriracha can also be added.

Proteins are all from the ocean. Ahi tuna, salmon, shrimp and even octopus are some of the options at the core of the restaurant’s menu.

“We have two teenagers who love tuna and seafood and the type of menu offerings found with Poki Bowl, and we believe others will also love it,” Nowak said.

Based out of San Jose, California, this will be Poki Bowl’s second location in North Carolina, with the first being in Wake Forest. This is the Nowaks’ first time owning their own restaurant.

“I have been in restaurants since I was in college and my career has been in food service equipment, not operations, but we really wanted to give it a go with something that was not in this area,” said Nowak.

There are currently only 32 Poki Bowl eateries across the country, and Nowak said a major perk for bringing Poki Bowl to Wilmington is that it is still a small franchise. Starting out a new business, he said it’s nice to have the support of a smaller franchise as well as the menu being something he and his family agree on.

Said Nowak, “We came to a realization that this side of town needed something new and delicious for people and we are happy to be able to bring this to the community.”

Poki Bowl plans to have a soft opening later this month and a grand opening in early February. The restaurant will be open daily from 11 a.m. – 9 p.m.