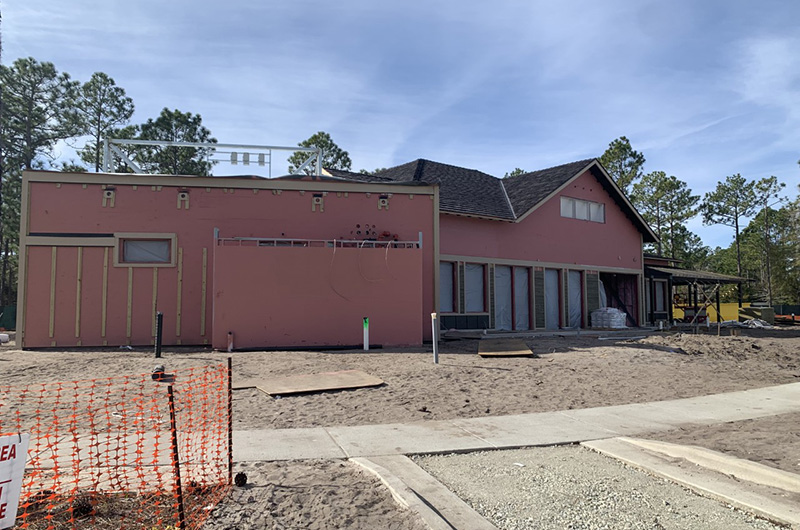 Construction is underway on Covey, a midtown restaurant slated to open in 2023. (Photo by Miriah Hamrick)
A new Midtown restaurant is taking flight, with construction underway and a planned opening for later this year. Named in a nod to small gatherings of people or birds, Covey plans to function as a neighborhood gathering place according to Brandon Wilson, a representative of the restaurant.

“Quail specifically was part of the impetus behind the naming,” Wilson said. “The quail would go out hunting during the day and then come back in a covey in the evening to feast and be together.”

Nature motifs will extend beyond the name of the restaurant, which is currently being built on a previously undeveloped wooded lot at the corner of Independence Boulevard and Tiburon Drive. Nestled among longleaf pine trees, the building will feature warm wood tones, including a pine tongue-and-groove ceiling atop the patio, with plenty of natural sunlight and glass. Once construction has finished, landscaping crews will restore the greenery.

“The whole space was nature, so we want to bring that back in after we’ve done the building and basically, just be understated within this plot of land,” Wilson said.

The restaurant, at 1610 Tiburon Drive, will feature a handful of dining environments for guests. A main dining room will seat about 50 people while the wine bar, located adjacent to a glass-encased wine cellar with room for roughly 1,000 bottles, can serve another 25 guests. On the other side of the reception area, the main bar will lead out to a patio, where visitors can sit next to a large gas fireplace. Three private dining areas, with capacities ranging from four guests to 20, will be able to accommodate low-key gatherings.

While construction crews finish the building envelope and move to interior work, development of the menu is underway with executive chef Jacob Carey, whose previous experience includes a long stint at PinPoint Restaurant, on board. Wilson declined to comment on the menu other than confirming the fare as “New American.”

Covey will serve dinner Wednesday through Monday once it opens, although Wilson said the restaurant could eventually expand its offerings to include weekend brunch service.

“We’re going to focus on our dinner service to start, and then we’ll consider introducing other aspects. We’ve built a space to accommodate diversification in operations, but we’re going to try to get dinner going and doing it well,” he said.

Covey, located at 1610 Tiburon Drive, is expected to open this year. When the project came before the planning board last year, the restaurant estimated an April 2023 opening, but Wilson declined to estimate a more specific time for opening.