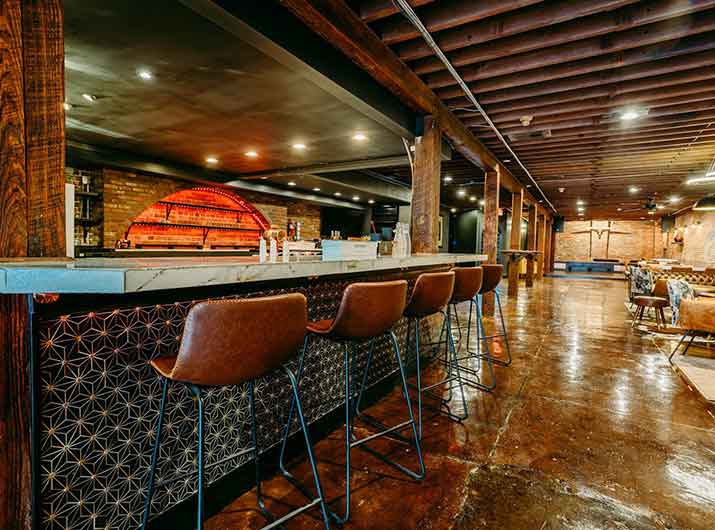 A marble bar top and geometric tile are among the modern elements juxtaposed with exposed brick, 120-year-old wooden ceiling beams and other historic features at The Underfront. (Photo by Lightbloom Photography/courtesy of The Underfront)
Tucked away beneath the bustling 200 block of North Front Street, a new cocktail bar is nearly ready to welcome its first visitors.

The Underfront Co., named in a nod to its subterranean space, will host a grand opening during the weekend of Feb. 3­ – 4 with craft cocktails, charcuterie boards and live music in a freshly renovated venue.

Building the business has been a monthslong labor of love for co-owners Ivan “Chip” Moore and Joseph Sena, who worked together to revamp the former Dead Crow Comedy Room location over the last four months.

The final product juxtaposes clean, modern lines and textures with restored historic features in an aesthetic Moore described as “Art Deco meets industrial.” Preserving the history of the space was important, Sena noted. Exposed brick walls, heart pine ceiling headers and columns, and a stained concrete floor — all original features dating back more than a century – are among the elements salvaged by the duo.

“We go through with an artist’s eye in that regard, and we try to blend the modern with the rustic,” Sena said.

A similar approach was used to develop The Underfront’s menu of drinks. With a full kitchen on site, The Underfront will make its own bitters, tinctures, syrups and dehydrated garnishes in-house. The spirits themselves will also be customized for cocktails. A stock of eight types of wood chips allows the business to control the smoky profile lent to each individual drink, as does a fat-washing process that imparts subtle tasting notes to some spirits.

“We want to do everything with an organic approach and then employ all the modern methods in mixology,” Sena said.

For example, one offering features End of Days Barrel Rested Rum, infused with a delicate coconut flavor through fat-washing with coconut oil, alongside fruity elements like Cointreau, lime and pineapple. Disaronno and a pineapple habanero syrup made with demerara sugar bring warmth and complexity to this refined riff on a tiki drink.

‘It’s got a bit of aroma and the taste of that coconut without being a cloying sweetness like you would get in Malibu or a typical coconut rum. It’s the best of both worlds,” Moore said.

Many of the drinks on The Underfront’s menu are reimagined classics, with options ranging from light and fruity to rich and full-bodied.

“You start with the airy and crisp cocktails and you progress all the way down to the deep, brooding, smoky cocktails,” Sena said of the menu's structure.

Towards the end of that spectrum is another fat-washed option, the Manhattan Clandestino. Duck fat-washed rye whiskey is paired with house-made bitters and Amaro Averna, then smoked with pecan chips to create a bold new spin on a traditional Manhattan.

“Even with something like a Manhattan or an old-fashioned, you’ve got to reinvent the wheel without totally reinventing the wheel,” Moore said.

Alongside cocktails and a selection of beer and wine, including 12 taps of local beer, The Underfront will sell charcuterie boards piled with house-sliced Italian meats and cheeses accompanied by three types of bread, fruits, housemade jams, kimchi, olives and other pickled goodies.

The Underfront is the fourth venture for Moore and Sena, who along with Sena’s wife Abigail, opened Whiskey Tango Foxtrot, Rumcow and Tacobaby. All three establishments have been sold to new owners, and after a short stint of “semi-retirement,” the industry beckoned them back.

“We do this for the love of it,” Sena said, noting that the duo has been driven by the goal of creating a unique experience for guests.

The Underfront, located at 265 N. Front St., will be open Tuesday through Saturday. The spot can also be booked as a venue for events with a capacity for 150 people.