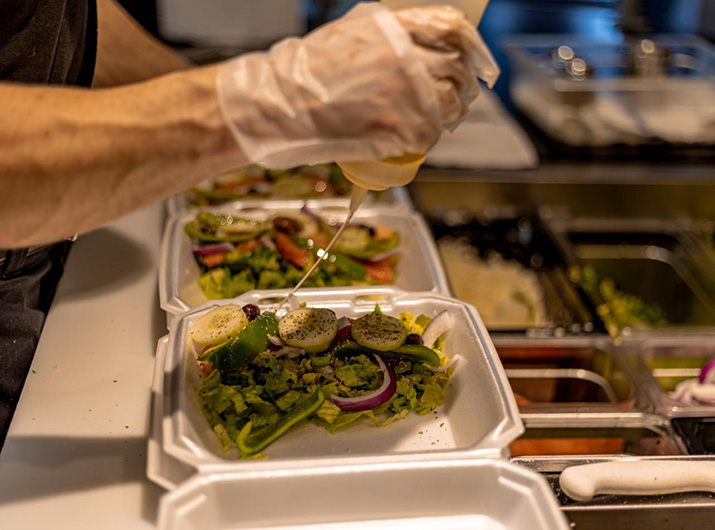 The Greeks is opening a new location in Leland Town Center in late 2023 or early 2024. (Photo courtesy of The Greeks)
A family-run Wilmington restaurant serving traditional Greek fare is one of the businesses coming to a new development underway at Leland Town Center.

The Greeks is slated to open its Leland location in late 2023 or early 2024, according to Yanni Papanikolaou, who operates the business with his parents and sister. He said the family has eyed expansion into Leland for years as they watched the nearby community grow.

“It’s literally the heartbeat of Wilmington,” Papanikolaou said, discussing the amount of traffic on U.S. 17.

Diners at the Leland location will have access to the same menu of Greek classics available at 4401 Oleander Drive, including dolma, falafel, gyro, spanakopita and souvlaki, plus a selection of beer and wine. The interior will be “more inviting,” Papanikolaou noted.

“We’re going to go with the same colors, but we’re going to try a more industrial look, more minimalist and modern,” Papanikolaou said. He estimated the family would start interior work on the restaurant this summer, when construction is expected to finish.

Since The Greeks first opened downtown in 2011, the business has changed locations and opened new ventures, including one as far away as Jacksonville in 2016. Currently, the only Greeks concept is the one on Oleander Drive, which opened as a second location in 2019.

Growth of The Greeks has always been a goal of the family, and Papanikolaou said the business’s experience expanding the concept has informed a new franchising package released late last year.

“It took us 12 years to iron everything out, and we want everybody to have the opportunity to have a really good return on investment,” he said. A perk of franchising The Greeks brand is the ability to keep labor and food costs low, he explained.

Another new venture for The Greeks is a cookbook, which the family expects to finish this year. Compiled of primarily family recipes, the book will feature some popular dishes from the restaurant, traditional fare like pastitsio and moussaka, plus some “exploratory stuff” that Papanikolaou expects will be new for most people.

One example is a recipe from Papanikolaou’s father for a 400-year-old dish of lamb kleftiko, which means stolen or hidden lamb in Greek. Kleftiko is said to date back to Ottoman rule of Greece and the Greek War of Independence, specifically to a group of Greek freedom fighters who would steal meat and clandestinely cook it in the ground to avoid detection. The modern take on kleftiko utilizes an oven to slow roast the meat and vegetables.

“It’s a combination of really tender meat, carrots and potatoes, all bound together with some red wine,” Papanikolaou said of the recipe in the forthcoming cookbook.

The cookbook will be sold online and at The Greeks, alongside another new addition: the restaurant’s dips, which will soon be available for wholesale purchase.

“Of course, you have hummus everywhere. But nobody has tzatziki or the spicy feta dip that we have. You can’t really find that in the stores. So we’re going to offer something different,” Papanikolaou said. He expects the dips to also be carried in local grocery stores by the end of 2023.