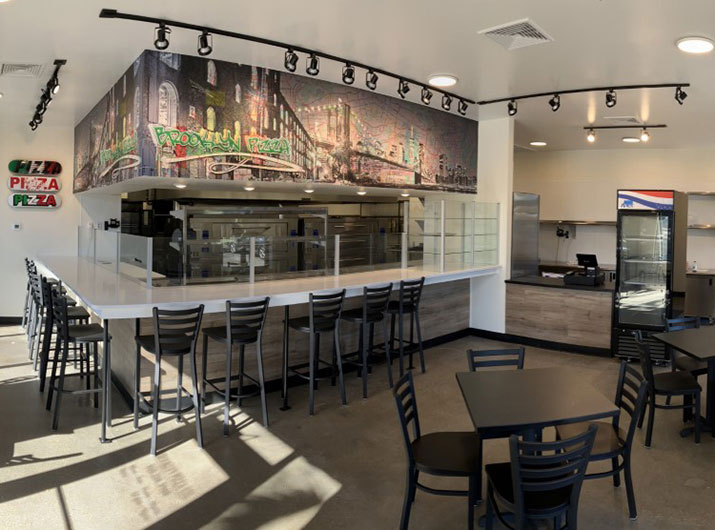 “We’re not going to try to be something we’re not,” owner Brad Sywolski said. “We’ll focus on what we’ve been doing for 24 years.”

The new shop quietly opened on Dec. 12, serving its time-tested menu of Italian American classics via counter service or delivery.

Pizza is naturally a top seller, and the business has honed its technique for a proper New York-style slice like the ones Sywolski grew up eating in Long Island. It starts with the right, hand-tossed dough. Brooklyn Pizza Co. proves its dough for about 36 hours to achieve the signature chewy, foldable crust with a crisp edge after a stint in the oven. Sywolski is sensitive to all the variables that impact the flavor and texture of the dough throughout the process, which he sees as art from start to finish.

“Once it gets in the pizza maker’s hands, it’s an art. Not everyone can pick that dough up, and in under a minute, make a pie and have it in the oven,” Sywolski said.

A simple half-cheese, half-pepperoni pie is the most popular choice among customers. Minimal toppings allow a few ingredients Sywolski described as “the freshest, top-of-the-market quality” to shine, and many elements are made in-house – including a fresh mozzarella homemade from curd, which Sywolski said is worth the extra work.

“It is labor intensive, that’s for sure. But it makes a difference,” he said.

Wings are another popular item. Their signature Jack Daniel's sauce is thick like molasses with notes of citrus, pepper and brown sugar to enhance the warm flavors of the whiskey.

“It’s tangy and I recommend it,” Sywolski said, adding that the buffalo sauce is “always killer” too. The shop’s jumbo wings can also be dressed with barbecue or teriyaki sauce. Calzones, parmigiana, pasta, sandwiches, sausage and peppers, and stromboli are among other menu offerings.

Sywolski partnered with his sister, an architect and design consultant, as well as local architect Frank Smith to customize the new space on Oleander Drive. The look is clean and modern, with a colorful mural atop the pizza counter where customers can sit and watch the kitchen staff at work. Sywolski tapped Image Monster to complete the mural, which he envisioned as an homage to the business’s namesake.

“I wanted an image of Brooklyn Bridge, a little bit of color and the imagery of the skyline as though you were in Brooklyn,” Sywolski said.

The Oleander Drive location is open from 11 a.m. to 10 p.m. Monday through Saturday and noon to 9 p.m. on Sunday.