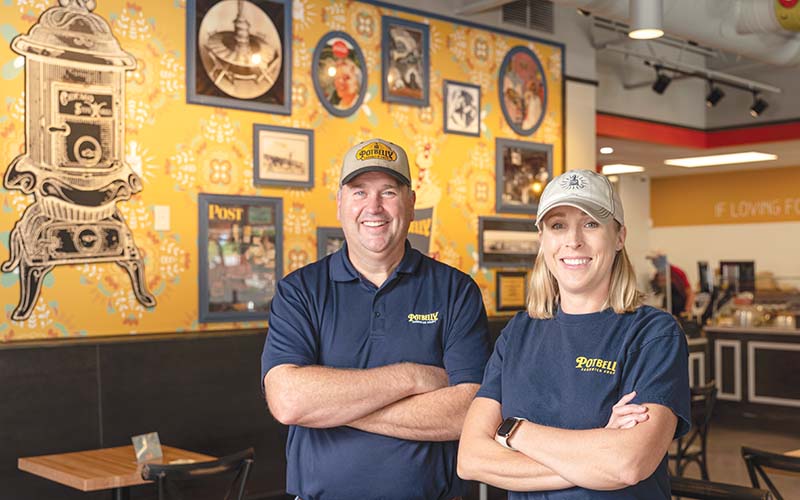 Husband-and-wife team Brent and Michele Brouse are opening a second Potbelly Sandwich Shop in Wilmington. The new drive-thru location is slated to open at 6818 Parker Farm Drive in 2023. (File photo by Michael Cline Spencer)
Potbelly Sandwich Shop is growing, with owners Brent and Michele Brouse moving forward with plans to open a new drive-thru location at 6818 Parker Farm Drive in 2023.

“This will be store No. 2 for us here in Wilmington, and hopefully there are more to come,” Brent Brouse said.

Brouse and his wife signed a franchise agreement with the Chicago-based chain to bring at least 13 Potbelly shops to North and South Carolina. The first of these locations opened at 2525 S. 17th St. in July 2020.

Before proceeding with their second shop, the couple needed a variance from the city of Wilmington to operate a drive-thru at the building on Parker Farm Drive due to its proximity to nearby residential areas. The city’s Board of Adjustment unanimously approved their request at a Nov. 17 meeting.

With his zoning exception in hand, the next step for Brouse is securing a building permit and starting demolition on the space, which was formerly home to SunTrust Bank. Although the bank previously operated a drive-thru at the location, Brouse anticipated the transformation from bank to sandwich shop would take some time.

In addition to the drive-thru, the store will also provide in-house delivery to local customers, an option Brouse said is lacking in Wrightsville Beach and Landfall. Those options, coupled with catering and takeout, offer “a bunch of different ways to Potbelly.”

Potbelly specializes in toasted sandwiches and hand-dipped milkshakes plus soups, salads and macaroni and cheese. Popular items in Wilmington include the chicken pot pie soup and A Wreck, a sandwich stacked with turkey, hickory smoked ham, roast beef, salami and swiss cheese.

Brouse said he sees potential for as many as five different Potbelly locations in Wilmington.