From Revamped Name To New Game Plan, Rx Retools For The Future 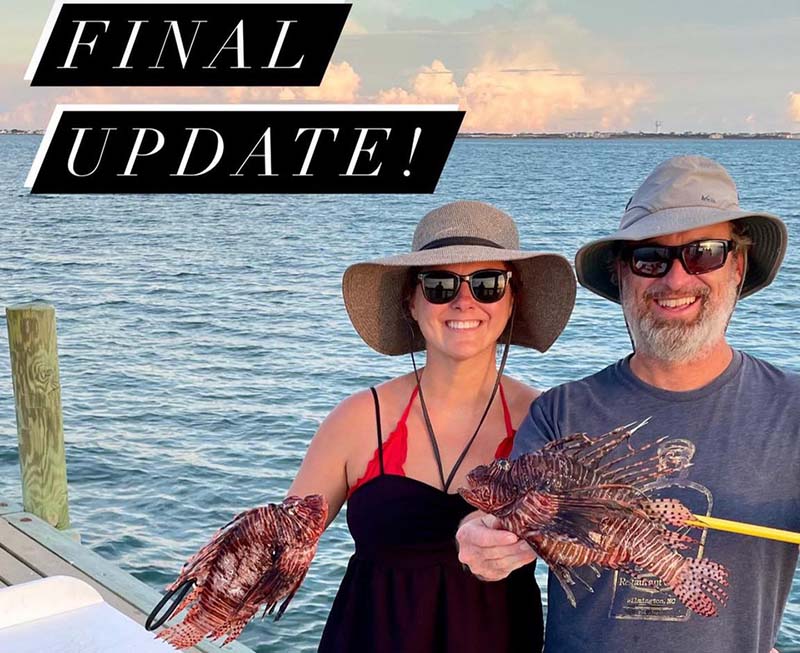 “We are predominantly going after underutilized species and specifically targeting lionfish: an invasive but delicious species that are destroying our reefs and decimating our local fish populations, like grouper and snapper,” the owners wrote. “We have noticed alarming numbers of these fish while scuba diving off our coast.”

Lionfish, which must be speared individually, boast venomous spines and require special gear to harvest and transport. But they are safe to eat and are numerous. Experts say reducing the species' population will benefit the ecosystem.

“They will be a staple on our menu when we’re able to go out and get deep enough to spear them,” co-owner Sarah Doss posted. “We will have them on our menu as often as we are able to. Fortunately, they are a delicious white fish with sweet, flaky meat that can be prepared in just about any way you can think of.”

Monday’s Facebook announcement was the latest in a string of news flashes from the restaurant since its temporary closing last February. The Dosses have used the intervening months to reimagine and revamp the business in major ways, starting with a name change. Rx Restaurant and Bar has slipped into a new moniker: Rx Chicken & Oysters, reflecting menu changes and a greater emphasis on seafood.

In June, the first official announcement shared the news that the couple had just started their own oyster farm.

“We just put our first 120,000 baby oysters in the water (with many more to come),” Sarah Doss wrote on Facebook. “We’re calling our oysters ‘Lucy Beas,’ named after our favorite saltwater lovers: our pups. We’ll be farming oysters in Stump Sound and Topsail and can’t wait to grow these babies big enough to serve you all.”

The Rx menu will continue to feature oysters from other farms as well, along with wild oysters harvested by Shell’em Seafood Co. when available, according to the post.

Earlier this month, the Rx owners announced they are expanding their operation into the house next door to the restaurant at 421 Castle St.

“In it, we’ll be adding a brewing and distilling operation (the Rx Brewstillery) with a small tasting room, where we’ll make beer and spirits the Rx way, focusing on local and high-quality ingredients,” Sarah Doss posted. “That will be something to look forward to in 2023. In the meantime, we will begin featuring some small brewing and distilling projects created in-house at Rx. You’ll still see some of your other beloved local beers and spirits on our shelves, but we can’t wait to add our own to the lineup!”

To prepare for this next chapter, the Rx owners have made updates to the restaurant kitchen and have made behind-the-scenes changes to increase the restaurant’s efficiency and green quotient. The anticipated date for completing renovations and reopening is sometime in early December.

Meanwhile, the Dosses have rented out the Rx space to a new film production, Searchlight Pictures’ The Supremes at Earl’s All-You-Can-Eat, which will start shooting soon in the area.