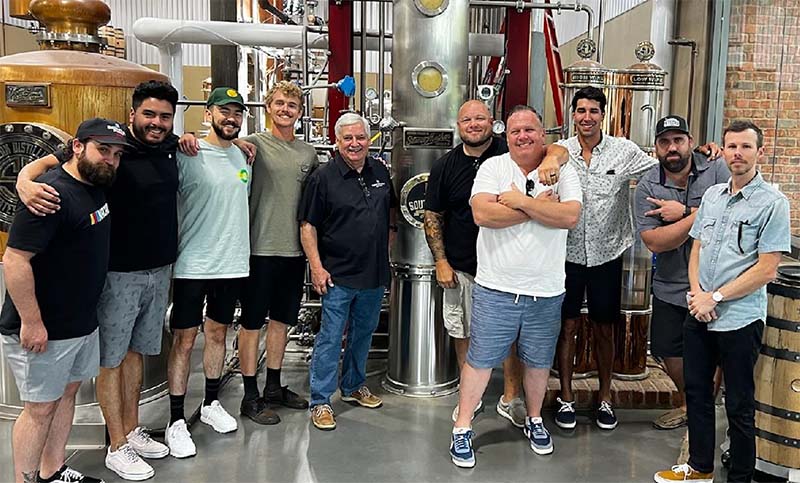 A new group of five businesses, the ILM Downtown Brown, has formed together to purchase unique whiskeys to serve in their respective establishments. (Photo courtesy of ILM Downtown Brown)
Pumpkin spice lattes and warm apple cider aren’t the only seasonal drinks Wilmington residents can anticipate sipping as the weather cools down. Beginning Oct. 5, pours of an award-winning bourbon from a North Carolina distillery will be available at five downtown locales: Brooklyn Arts Center, Dram & Draught, Front Street Brewery, manna and Rebellion NC.

Craig said working together allows them to sidestep supply issues resulting from North Carolina’s state-controlled liquor market. One issue under this system, Craig noted, is that rare spirits are often distributed based on a lottery.

“If you’re interested in specialty whiskeys, your name will get drawn out of a hat, basically, for allocation of those bourbons and whiskeys,” said Craig. “And there are very few bottles that come in at a time.”

The coalition will enable the businesses to pool resources to buy a barrel of bourbon or whiskey outright. It also means the businesses can collaborate when making their selections, resulting in joint barrel picks that pass the muster of their combined palates and preferences.

In August, representatives from all five businesses traveled to Southern Distilling Company in Statesville to pick their first offering. Weeks later, the Paragon Cask Strength bourbon was recognized as Best in Class and Best Overall Bourbon out of more than 650 spirits at the New York World Wine & Spirits Competition.

“We know we’re getting a good product because we know this industry so well; we know these spirits so well,” said Craig. “If we’re able to actually go to these distilleries and handpick a barrel of bourbon knowing what we know, then we’re going to be able to offer our guests a great product and create a unique experience for them.”

The Paragon bourbon boasts a strong tannic structure balanced by sweetness from the wheat used for the mash bill. It also packs a punch at 113.3 proof, but Craig said the spirit is “scary smooth” despite that high proof – and still offers the tasting notes typical for bourbon.

“You still get some traditional bourbon notes: the vanilla, the caramel flavors, a lot of baking spices like some cinnamon and allspice,” she said.

The bourbon was equally distributed among the coalition’s five members, with each business receiving five cases to pour while supplies last. In addition to the bourbon itself, Front Street Brewery also snagged the barrels used to produce its supply of the Paragon bourbon, which the brewery is currently using to age a batch of its Dram Tree Scottish Ale for a collaborative release by the coalition later this fall.

“All of that whiskey that’s soaked up in that barrel, that’s living in that oak, we’re able to impart flavors of that into this bourbon barrel-aged beer,” Craig said. “You’ll get some of those rich, caramelly, boozy flavors out of there, those tannins from the charred oak of the barrel itself.”