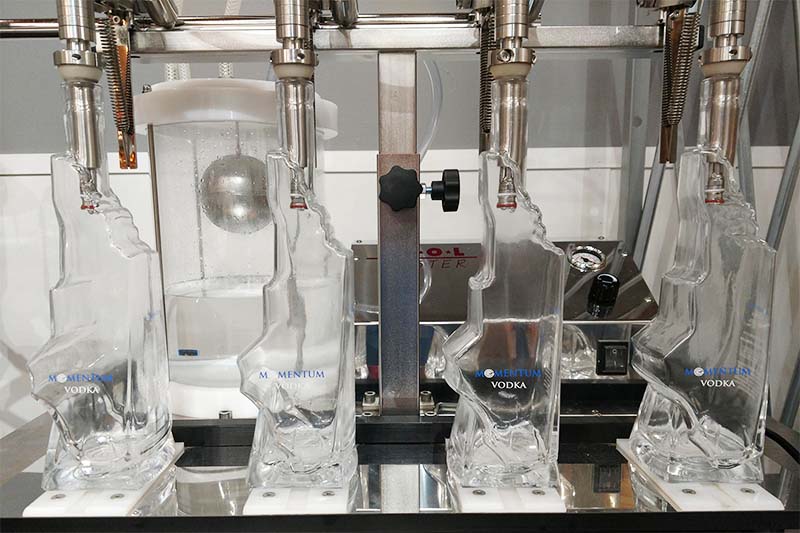 Ford patented the idea for the bottle years ago, when he was working on creative place-based branding for Momentum Surf and Skate, a downtown business he owned until 2019.

“We wanted to represent North Carolina with something cool for locals and cool for tourists to get,” said Ford.

The bottle, which contains Momentum’s 80-proof vodka, was released last week at the boutique microdistillery located in The Cotton Exchange. Ford envisioned an eye-catching bottle but wanted to make sure the product within it was just as exciting. He worked with a distillery consultant to develop the flavor profile for the corn-based vodka. A sweet and mellow spirit is produced by careful sourcing and distillation techniques, Ford said, including a slow filtering process through activated carbon sourced from ground coconut shells to ensure a smooth finish.

“You can actually taste the sweetness of the corn that we use, rather than just getting a mouthful of ethanol like you get with a cheaper vodka,” Ford said.

For each of the approximately 300 bottles sold during the rollout of the new vodka from Sept. 21 through Sept. 23, the business donated $2 to NourishNC, an organization providing meals for food-insecure students in the community — a mission Ford said he finds particularly meaningful as a father.

“I have three daughters that are elementary-school age and the fact that some kids go to school starving on Mondays is hard to hear. I’m sure they’ve got kids in their classes that may have these kinds of needs, and the way they do it, it’s very discreet,” he said. ”It’s just a great cause to try to do something to help out.”

For now, the vodka bottle is only available at Momentum’s location in The Cotton Exchange, but plans are underway for distribution through North Carolina’s ABC stores by the holidays.

Ford is also working on the release of other offerings this fall, including a rye whiskey and two gin and two rum varieties. A barrel-aged bourbon is in the works, but a five-year maturation process puts the release for that product further on the horizon. In the meantime, Ford sourced the aged rum and whiskey, also typically matured for longer periods of time, from distributors and has honed a distinctive flavor profile for the spirits through a secondary aging process.

“A lot of people have asked me about if we’ll do a whiskey,” Ford said, adding that he expects it will sell out quickly once it’s available.