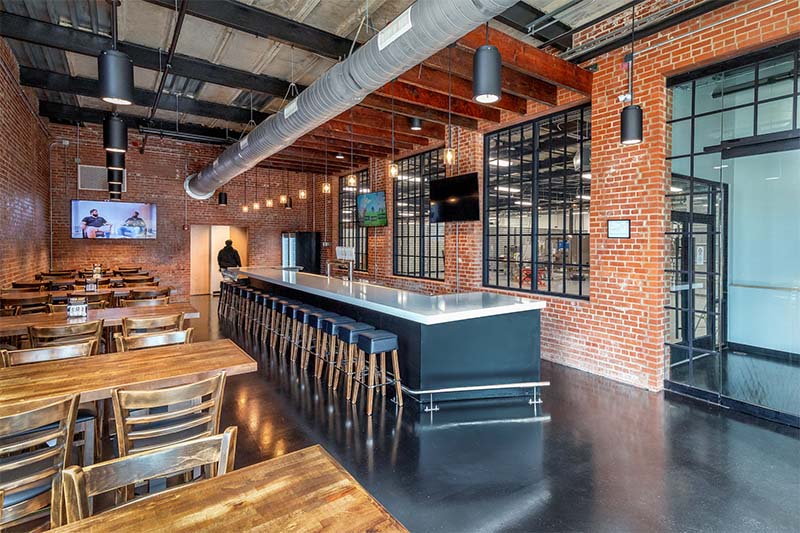 The taproom at TRU Colors on Wilmington's Southside opened to the public in late June. (Photo courtesy of Monteith Construction)

Late last month, TRU Colors opened doors to its taproom to the public for the first time.

The Wilmington brewery, which employs active gang members, already has shelf space in major grocery stores and is available in 1,900 bars across the state.

Founded by George Taylor, TRU Colors inked an equity deal last April with undisclosed terms with Molson Coors –– one of the world’s largest beer producers –– before ever selling a draft out of the Wilmington taproom.

Coastal Beverage Co. is TRU Colors’ local distributor, according to brewery spokesperson Meagan Verdi. “They believe in our mission and our product as all of our distributors do and they have all played an essential role in getting our beer statewide,” she said.

The flagship canned brew TRU Light was first rolled out for commercial production in September. This spring, the brewery announced a $9 million infusion from PNC Bank, which also acquired equity in the growing brand.

Originally slated for a city-owned property downtown, Taylor focused on 715 Greenfield St. in 2019, previously home to a dilapidating textile mill. He tapped LS3P to design the exterior, which modernizes but still harkens to the original Century Mills Inc. build and R design collaborative for sleek industrial interiors.

The 55,000-square-foot space serves as the brewery’s headquarters, including an open-office floorplan, brewery, taproom, recording studio and gym and locker room. Monteith Construction oversaw structural repairs to the aging building, including abating asbestos and installing new utilities. This work wrapped in September, with the taproom being the last component of the complex project.

Today, the canning process is visible from the taproom via large glass openings.

“The entire building, including the new taproom space, was not in good condition upon project start,” said Monteith spokesperson Colleen Coons. “Monteith Construction had to relevel the entire concrete floor, as well as clean and seal all the masonry walls to create a secure, functional space. Large, new window and door openings were cut into the interior and exterior walls, allowing both natural light to fill the space, as well as visibility from the taproom into the brewery operations area.”

With the help of local nonprofit Kids Making It, Monteith salvaged original wooden roof joists, which now decorate the taproom and reception areas.

"The TRU Colors taproom is one of the coolest bars in town. It's a unique space –– from the salvaged beam cladding the taproom ceiling to the large white countertop sitting in contrast to the black concrete floor and bar casework to the inviting outdoor area, " said superintendent Luke McKeithan, who lead the TRU Colors renovations. "The entire building was designed to create sightlines from one part of the brewery into another, allowing visitors to both tour the space and get a better feel of the TRU Colors culture."

In the renovated taproom, TRU Pale Ale is also available on draft, according to Verdi. While TRU Light is a lager, TRU Pale Ale is “dry-hopped with an experimental hop that brings stone fruit and pineapple flavors but finishes with subtle hop bitterness," Verdi said.

“Being able to open the doors and have people come in for beer and tours has been an incredible opportunity to start conversations,” Verdi said. “People are always blown away by the scale of the brewery and all of the things it houses like our classrooms and recording studio.”

Tech entrepreneur Taylor faced a long and at-times tumultuous path to reach this latest milestone. The company fielded questions last summer following a fatal shooting that occurred in a home owned by his son, the brewery’s chief operating officer. Three people, all validated gang members, were charged with murder and attempted murder, in the killing of Koredreese Robert Tyson (a brewery employee) and shooting of Bri-yanna Emily Williams, who were sleeping at the house.

The company’s mission is to combat street violence through economic and professional empowerment.

“We have found that getting people through the door in the taproom is a powerful way to change perceptions and create supporters for our mission here at TRU,” Verdi said.

TRU Colors is working on a collab beer release that will be unveiled as the summer ends “with one of the biggest beer brands in the country,” according to Verdi.