Smash-n-Dash Rolls Out 'sexy Food' – And An Altruistic Mission 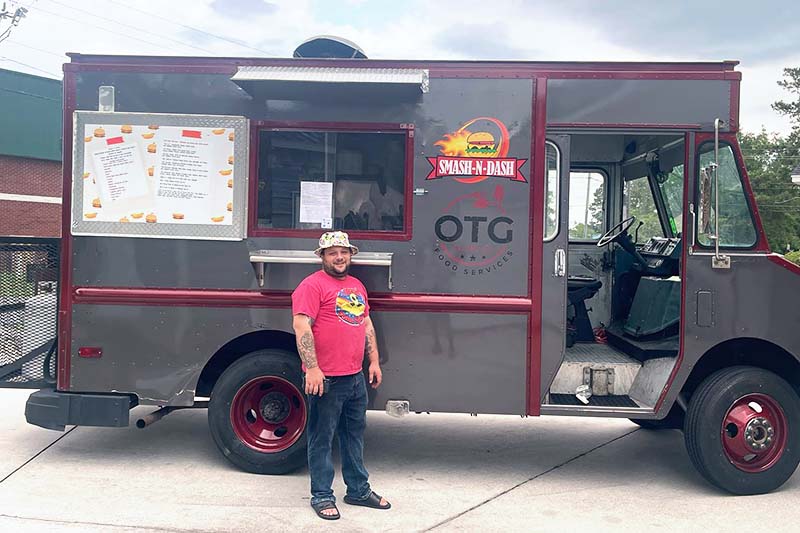 Kory Sanderlin stands in front of his new food truck venture, Smash-n-Dash OTG, which focuses on smash burgers. (Photo courtesy of Smash-n-Dash OTG)
A new purveyor on the local food truck scene has a straightforward mission: to feed hungry folks in the greater Wilmington area so it can help feed the hungry throughout the state.

Smash-n-Dash OTG (On the Go) recently launched operations from its Leland base, offering a variety of smash burgers along with nachos, pulled-pork sandwiches and bacon-wrapped hot dogs at area locations. The fare is “sexy food,” according to owner Kory Sanderlin.

“We want our food to be attractive to the eye as well as delicious,” he said.

The success of Smash-n-Dash OTG (part of OTG Food Services LLC, based in Cooper, Texas) will fuel its 501(c)(3) nonprofit, BareNecessities of NC, founded last October by Sanderlin and his sous chef, Daniel Pasillas.

“Our goal is to supply the people of North Carolina with the necessities all humans need to survive: quality food, clean drinking water and safe, affordable living,” Sanderlin posted on the organization’s Facebook page. “All donations given to BNOFNC and/or raised in operations of our mobile food truck, Smash -N- Dash OTG Food Services, go directly to meeting our goals and mission to wage a nationwide war on hunger pains and to fight the struggles of poverty!”

Sanderlin says he and Pasillas are in the “building block” stage of their food truck business as well as BareNecessities, but he is hardly a novice restaurateur. Armed with a degree from Cape Fear Community College’s culinary program, he logged 10 years in the restaurant industry before firing up his own food truck and hamburger stand in Leland, which evolved into M&K’s Kitchen, a partnership with his brother Miles.

Sanderlin posts his truck’s whereabouts on the Smash-n-Dash Facebook page. For now, the truck will double as a BareNecessities food truck, bringing extra helpings to underserved communities and food deserts, but Sanderlin’s long-term goal is to operate a separate BareNecessities truck.  More information about the organization and its goals is found here.