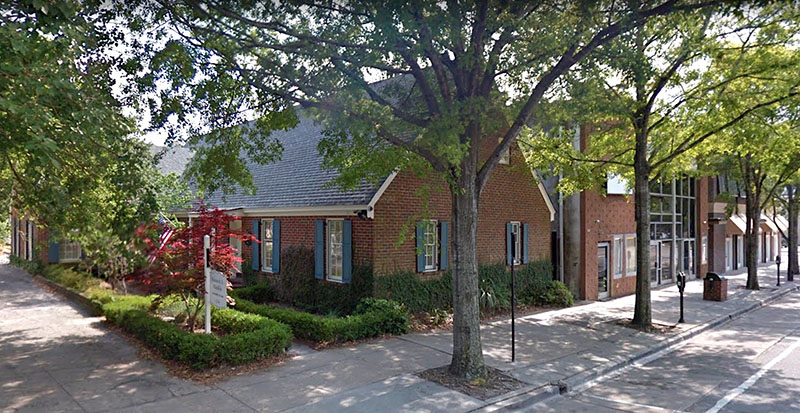 Durham-based Ponysaurus Brewing Co. has chosen Wilmington for its second location, this former law office at 214 Market St. (Photo by Scott Nunn)
With more breweries/eateries announced seemingly every day in Wilmington, owners have gotten creative in finding a location. The Eagle’s Dare is planned for a mid-century modern former service station on North Third Street; Cugino Forno Neapolitan Pizza is opening in a 1940s-era auto dealership at 11th and Princess.

Now Durham-based Ponysaurus Brewing Co. is raising the bar, so to speak, with plans to open a home to a pizzeria and terraced garden restaurant at 214 Market St., a former attorney’s office.

Based in Durham, Ponysaurus bills itself as a “forward-thinking, backward-tasting brewery.”

Although it’s been around since 2013, this is only the second location for Ponysaurus, which is part of the Durham-based Cast Iron Group. The restaurant group offers a diverse mix of food in several Triangle-area locations, including a classic Japanese noodle shop and a pita truck that makes the rounds between Raleigh, Durham and Chapel Hill.

Ponysaurus is Cast Iron Group’s beer initiative and will keep the food focus on pizza, at least for now, according to Sarah Voran, director of marketing and strategic development.

Voran said the restaurant would offer an extensive list of Ponysaurus Brewing Co. beers, including its core, seasonal, specialty and barrel-aged beers. The brewery focuses on “traditional and experimental American, Belgian and European-style beers,” according to a news release.

Though this is Ponysaurus Brewing Co.’s first location outside Durham, they aren’t new to Wilmington – its beers can be found on draft and in cans at places such as manna, Cape Fear Wine & Beer and The Brewer’s Kettle.

A firm opening date has not been set, but Ponysaurus hopes to open by summer 2022.

The new location is the former office of attorney Kenneth A. Shanklin. According to county property records, an LLC associated with Cast Iron Group bought the 3,100-square-foot building in December for $925,000.