Business has been steady ever since the shop opened its doors, Marty Schechter said.

“We offer hand-dipped ice cream in 36 flavors at any time,” he continued, explaining that he buys his ice cream from Ashby’s Sterling Ice Cream, a Michigan-based company whose products are 14% butterfat and very true to taste.

“In making ice cream, you control the amount of air you put in it,” he said. “The more air, the fluffier the ice cream, but you lose a lot of taste. Ashby’s injects only a small amount of air. Per scoop, it’s more costly, but you can’t beat the taste of it. The quality and recipes I can’t compete with. Every flavor is spot on. Banana pudding is a big seller, as with all our other flavors." 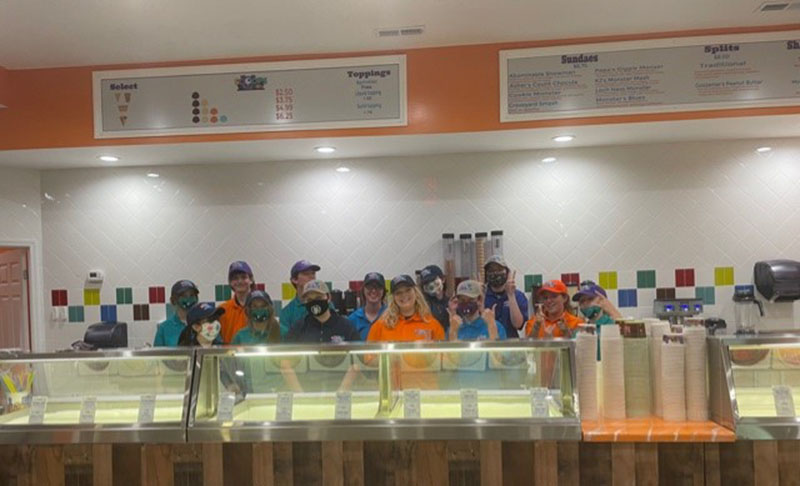 Because the cost of real estate in Burgaw is reasonable, he added, he can sell a more expensive ice cream at affordable prices.

Scoops isn’t the Schechters’ first dip into the frozen dessert market. While Eve Anne Schechter pursued a career as a regional manager for PNC Bank in the couple’s native New Jersey, her husband owned three ice cream stores: two on the Jersey Shore and one nearby. He ran the shops, making his own ice cream, from 2010 until 2017, when the couple decided to seek a warmer climate.

They purchased land in Rocky Point and built a house there. When it was finished, they bought property in central Burgaw for their new venture. After a few COVID-related delays, construction of the shop was completed in time for an early October debut. Marty Schechter had planned to make his own ice cream but after sampling Ashby’s, he decided to purchase their products instead.

“The quality and recipes I can’t compete with,” he said. “Every flavor is spot on, and each is better than the one before.”

“There has been steady traffic; I’m very pleased,” Marty Schechter said of the new venture. “There is no problem to expand the hours if the demand is there.”