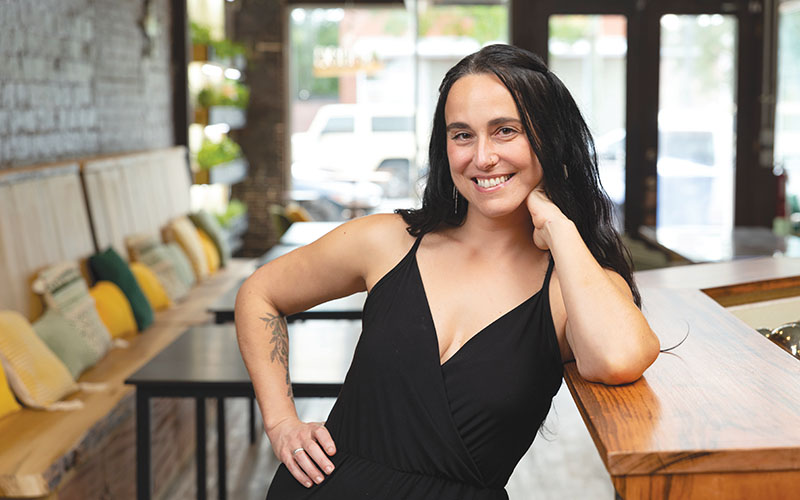 Alicia Mitchell, owner of The Kitchen Sink, plans to open her new restaurant at 622 N. Fourth St. in downtown Wilmington in November. (Photography by Michael Cline Spencer)
Over the years, Wilmington’s Brooklyn Arts District has been like a flower renewing its bloom whether it was springtime or not. This year, the neighborhood is once again blossoming with two new restaurants set to open in the fall.

They will join a myriad of other establishments aiming to lend to the district’s status as one of the city’s up-and-coming places to be.

“Being a part of the Brooklyn Arts District already feels like home, and I’m so excited to be a part of it,” said Alicia Mitchell, who plans to open The Kitchen Sink in November.

Located in the heart of the district, The Kitchen Sink will open in the old The Foxes Boxes location and bring a fresh spin on soups and sandwiches for the area’s lunchtime crowd.

Mitchell said she sees the Brooklyn area as a community and wants her restaurant to feel like a home away from home, not by just offering great food but also providing a comfortable atmosphere. She said growing up in an Italian family, the kitchen table was an important part of life and she hopes families and friends can sense that when at her eatery.

Keeping in mind that some diners may have a desire for healthier options, Mitchell is including vegan and gluten-free items on her menu.

Up the street, the brand new three10 will bring Southern food to the forefront when it opens later this month. Husband-and-wife team Matthew Walker and Jennifer Concklin, who both have years of restaurant experience, are hoping to bring a low country-style of food to the neighborhood.

Concklin said she feels that while a restaurant’s food sets the tone and brings diners back time and time again, she also feels the style of the space determines a lot.

“When we were designing this space, I asked for a comfortable dining room. I wanted it to feel like you were going to your grandma’s house after church on Sunday,” Concklin said.

The restaurant will already be unique when it opens because of its location inside a historical home. Built in the 1920s, the dwelling was set to be demolished, but Concklin and Walker, with assistance from the Historic Wilmington Foundation, were able to save the building and move it from 310 Bladen St. to its new home on the corner of Fourth and Swann streets. Hence the name three10.

Over a course of renovation and addition, the house now has an open kitchen and a large front porch for additional space.

The dining room is the original rescued bungalow house. Concklin said she is comforted by the fact that there’s a little piece of Wilmington history in three10.

Walker, who will serve as chef and hails from South Carolina, is creating a low country menu that he hopes will add something different to Wilmington’s dining options.

Both restaurants are looking to use local ingredients and seasonal items. Mitchell said that using local vendors and flavors makes a restaurant more special.

She said that seasonal items are a must for her menu because they showcase the flavor of the region for locals and tourists.

Concklin echoed those sentiments, saying,“Matt is really striving to keep seasonal items on our menu. He feels that keeps our menu fresh and will enhance our flavor.”

The area has seen several restaurants come and go over the years. Angus Grill opened in the heart of the Brooklyn area earlier this year at 1001 N. Fourth St. A restaurant that first opened in Winterville, Angus Grill is known for its burgers made fresh every day.

Like its sister restaurants in the Greenville area, Angus attracts college kids as well as workers needing a quick lunchtime break.

In an interview with the Business Journal earlier this year, Jordan Michaels, majority owner of the Fourth Street eatery, said that he hoped Angus Grill would be able to be a part of the Brooklyn neighborhood just because of its growth and revitalization.

Angus has a wide variety of items on its menu, with nearly 30 burgers to choose from, including a turkey burger, a black bean burger and the Beyond burger.

The restaurant also serves chicken sandwiches, salads and burger-brisket combos, all with a choice of side.

For residents of Brooklyn, it’s a good thing to see new food options coming to the area.

Scott Juall, who has lived in the Brooklyn district for nearly 20 years, said it is nice to see new restaurants coming and is hopeful they will stay, as many have come and gone in the past.

“Restaurants have been hit or miss in this area of town over the years. What seems to do really well are the food trucks that come through, but it’s encouraging to see new places open up,” he said.

Juall said that while some restaurants have struggled, the local Boombalatti’s ice cream shop on Fourth Street is always very busy. Still, he said it would be nice if restaurants could indeed flourish more often in this part of town.

Resident Felix Ortiz Cruz just moved to a nearby neighborhood this summer and is looking forward to new options for dining. He said he wants to try both The Kitchen Sink and three10.

Said Ortiz Cruz, “Both places are so visually appealing. It’s nice that those storefronts aren’t just boarded up. It’s a sign that things are happening and growing down here and that’s good for everyone.”