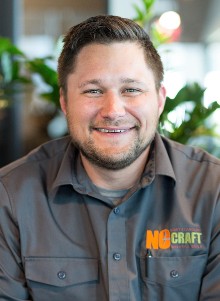 Kevin Kozak
A brewpub that has been in the works since 2019 is now coming to fruition in downtown Burgaw, with the town’s approval of a special use permit for Burgaw Brewing at 103 S. Wright Street.

The project, initiated by Burgaw Now, an organization dedicated to the promotion, restoration and development of Burgaw, will be owned and operated by Kevin Kozak, a professional brewer who has been in the industry since 2004.

Kozak moved to Wilmington in 2006 and held the position of head brewer, among other positions, at Front Street Brewery for 13 years. The building where the brewpub will be housed is owned by Burgaw Now founder Richard Johnson.

“We were thrilled to get the green light from the town,” Johnson said. “Burgaw Now’s model is to find entrepreneurs who support our vision for the town. Kevin’s experience, drive and personality makes him the perfect fit. I have been picking winners for many decades and with Kevin at the helm, I know Burgaw Brewing is going to be a smashing success.”

The brewery will house a 10-barrel brewing system created by Canada-based Specific Mechanical Systems. Kozak said the system is now in production and will allow the brewery to have six to eight beers on tap once it’s fully operational.

“It’s the perfect fit for a tight space,” Kozak said.

The roughly 4,000-square-foot building will also hold a full commercial kitchen, a full bar and taproom seating for around 150 guests. An outdoor beer garden and seating along the front of the building has also been approved.

Kozak said Hipp Architecture & Development of Wilmington is currently finishing up the plans for the space and he will begin reviewing bids from contractors shortly.

“The layout of the building is basically done, but some of the design elements are still being determined,” said Kozak when asked about the overall look of the new brewery.

Kozak said he plans to brew a little of everything, but his “heart lies with a good German lager.”

“Our flagship will likely be a German-style Helles, my favorite of all time,” Kozak said. “It’s a style that’s approachable for everybody.”

As for the food, Kozak anticipates offering elevated pub fare such as burgers made with beef that’s ground in-house and homemade brats. There will be a smoker on-site that will allow the kitchen to experiment with several varieties of smoked meats.

Kozak is hoping for a late fall or early winter opening.