Bites And Sips At Catawba Brewing In Wilmington 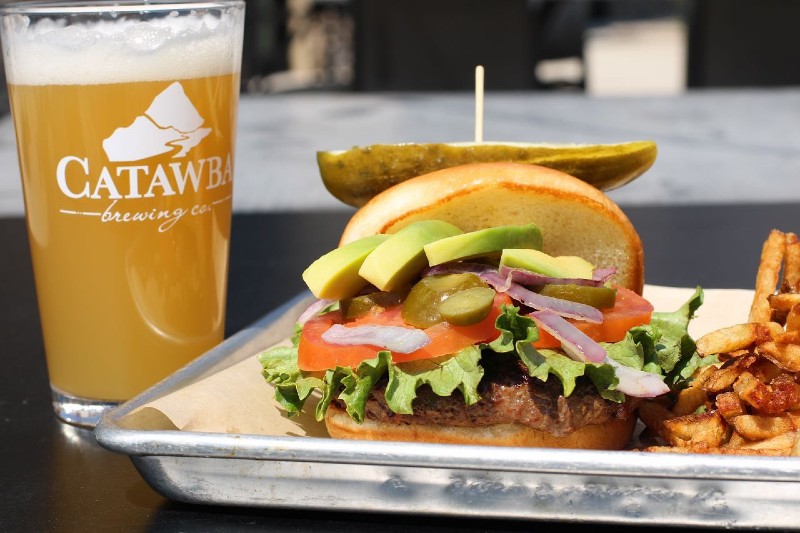 “This is our only location that has a restaurant,” said general manager Mary Mayo. “That is one of the things we were most excited about with this acquisition.”

Daryl King, who worked with Skytown’s chef and owner Stephen Durley for the past two years, has stayed on to run the kitchen at Catawba. Mayo said the brewery challenged him to drop the median price point to $11 to $13 per meal, a strategy she said has led to some incredible appetizers and full meals at a great price.

“Daryl came up with some great ideas and we celebrated our grand opening with about 40 items on the menu,” Mayo said. “We’ve since cut it back to about 20 of the best sellers.”

King’s new contributions include appetizers such as the chicken cordon bleu bites and deep-fried sausage gravy, the Mariachi quesadilla and a California burger with avocado, tomato, lettuce, grilled onions, chipotle aioli and sliced jalapenos. There are also four new vegan items on the menu, including vegan Catawba tat-chos and a vegan veggie flatbread.

King has also kept a few Skytown favorites on the menu but added his own twist to the dishes.

Mayo said the biggest-selling items have been the appetizers, including the oven-baked pretzels with pimento cheese, and the smoked wings that can be grilled or fried before tossed in a choice of sauces.

As for the beer, Catawba has expanded its draft system to include 24 taps and serves a rotating selection of core beers along with small batch brews that are brought in weekly from Asheville, where the R&D brewing is done.

“It’s great to have the public be able to try and give feedback on our experimental beers,” Mayo said, explaining that the small experimental batches that sell well will often be made into larger batch releases.

While the company’s largest annual limited-release event, Peanut Butter Jelly Time, is coming to and end shortly, Mayo said two of this year’s new releases, the Orange Marmalade and the Concord Grape, will be on tap for another week or so.

While not a full liquor bar, Catawba does offer assorted liquor specials including a Loaded Bloody Mary, topped with a full cheeseburger, bacon, cheese and assorted veggies.

Catawba offers live music on its patio on Sundays from 1 to 4 p.m. as well as an industry day on Monday, open mic night on Tuesday, trivia on Wednesday and a thirsty Thursday special of a large loaded hot dog and a beer for $10. Follow Catawba on Facebook and Instagram for full details on daily specials and events.