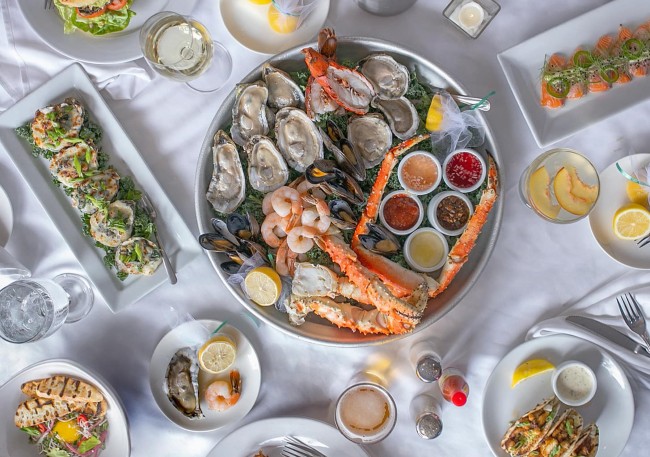 Kevin Jennings, who owns Urban Food Group with his wife, Stacey, said they have thought about changing the name of the restaurant for some time now. The Raleigh-based company purchased Boca Bay, as well as Brasserie du Soleil and Osteria Cicchetti, from Circa Restaurant Group in January 2019.

The restaurant reopened to the public last week, having undergone what Kevin Jennings described as significant refresh. Both the interior and exterior of the restaurant have been repainted and the restrooms have been remodeled, and they are putting the finishing touches on a new outdoor patio, which will soon include seating for approximately 80 guests, a firepit with rocking chairs and a new fountain.

“We took the opportunity to reintroduce the community to the restaurant,” Kevin Jennings said. “Our goal is to welcome back our existing clientele as well as open our doors to a wide range of new demographics.”

He said the menu at Soundside will include several Boca Bay favorites, as well as new items, with a focus on locally sourced seafood.

“One of the biggest complaints I hear about about seafood restaurants locally is that many of them do not feature local seafood on their menus,” Kevin Jennings said. “So that will be our focus. We want to help support and grow our local oyster industry and utilize whatever locally caught fish are in season. We want to know who, where and when the fish was caught and pass that information on to our customers.”

He said another goal of Soundside is to make it a bit more approachable.

“Seafood in general is pricey, and the Boca menu had gotten pretty expensive,” Kevin Jennings said.

New menu items include an oyster po’boy, a New England-style lobster roll, crab dip and a selection of steamed seafood such as crab legs, lobster tails, mussels and clams when in season.

There are also some new non-seafood items such as a burger and hoisin barbecue chicken with a Colorado potato salad.

“The idea is that Soundside can still be a special occasion restaurant, but it doesn’t have to be,” Kevin Jennings said. “It can also be the place you go to grab a lobster roll or a burger.”

He said that companywide, Urban Food Group, which in addition to the three Wilmington restaurants also operates three restaurants in Raleigh, two in Charlotte and one in Denver, saw a 49% loss from 2019 to 2020.

“It was a gigantic loss,” Kevin Jennings said. “But the Wilmington restaurants really kept us going.”

He said that while the restaurants located in the heart of Raleigh, Charlotte and Denver took the hardest hits, the North Raleigh and Wilmington locations have been the quickest to bounce back.

“It was the nature of the pandemic that people were heading to the beach,” Kevin Jennings said. “So the Wilmington locations have helped us greatly in our recovery thanks to an influx of visitors and the loyalty of locals.”

He said he will rely heavily on feedback from local customers, both old and new, in helping to shape the future of the menu at Soundside.

“We want to hear from them what they liked about Boca, as well as what they always hoped it would offer,” Jennings said.

As for the much-loved Sunday brunch buffet, it will likely not resume any time soon, but an a la carte brunch service will begin on Mother’s Day, May, 9. Jennings said that as COVID-19 restrictions are lifted, it may be possible to revisit the idea of a brunch buffet for special occasions, but the a la carte brunch is the plan for now.