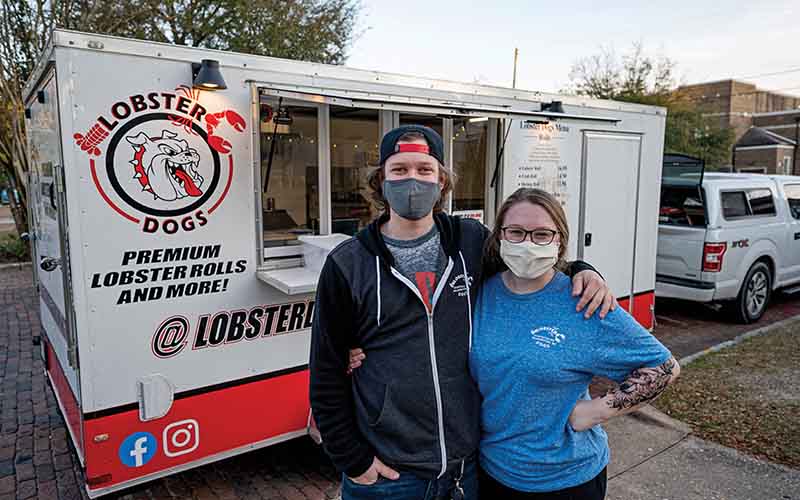 Business developer and president of Wilmington’s Downtown Business Alliance Terry Espy said that food trucks used to be an affordable way for a chef or restaurateur to pave the way toward a bricks-andmortar location. Now, she said, established restaurants are wheeling out their own food trucks as a way to survive COVID-19 limitations.

“Food trucks truly have saved a number of restaurants,” she said.

The concept is simple: When health barriers reduce the number of people who can eat at your restaurant, take your food to where the people are.

Matt Danylec sees adding a food truck to his restaurant, Platypus & Gnome, as a way of generating word-of-mouth.

Platypus & Gnome couldn’t expand its outdoor dining by creating a “parklet” during 2020’s Downtown Alive initiative as some other eateries did because its abutting curbside area is a loading zone. A food truck seemed the best option, and the Chrome Gnome was born this past September.

Chrome Gnome features a rotating variety of selections that reflect the eclectic fare for which its sibling establishment is known, but some have a distinctive food truck vibe, Danylec said.

One of the Chrome Gnome’s regular stops is at End of Days Distillery on Castle Street in Wilmington. It’s among a variety of mobile meals purveyors that park in front of the establishment on weekends.

End of Days features “all that there is” in the way of food trucks, according to founder and co-owner Beth Faulkner, who added, “Honestly, I would like to sponsor about 10 more. We’ve had great experience with all of them.”

“Cheesesmith is probably the hottest truck in town,” she said. “They offer nice adult grilled cheese sandwiches, like with brie and truffles. Wilmywood is pretty hot as well. New to town is Asian fusion Bahn Sai; it’s been fairly well received.

“I’m impressed with anyone who is looking outside the box, and I feel food trucks are doing that,” Faulkner continued.

Lobster Dogs, which specializes in seafood rolls and seafood-stuffed avocado, is new to the local food truck scene and is already in the mix at End of Days and area breweries. 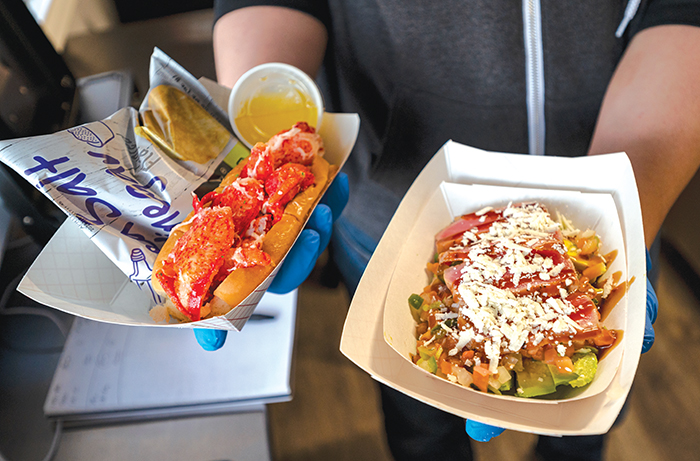 John Cornelius estimates there are between 30 and 40 food trucks operating in the greater Wilmington market, most of them offering meals rather than just snack items. He should know. As the owner of Wide Open Tech, which developed web-based application Food Truck Track last fall, he keeps app users posted on the whereabouts and schedules of local mobile purveyors.

General demand for food trucks here continues to be on the rise, he said, citing the launch of new trucks and – for popular existing ones – long lines at host venues.

“At Flying Machine Brewing Co., for example, you can’t get a seat if you don’t get there right when a truck shows up,” he said.

Current COVID-19 contagion levels and brisk winter temperatures may have reduced demand somewhat, Cornelius said, but he predicts that enthusiasm for food truck experience will continue even when the coronavirus is no longer a factor in people’s dining decisions.

“Breweries are popular, and they don’t want to have to install kitchens,” he added, explaining that the rotation of trucks among the area’s breweries and distilleries lends variety to the experience. “If you go to one venue all the time, you are exposed to different kinds of food. The quality of the food has been good, and more higher-end restaurants are getting in on food trucks.”

These days, the range of venues has expanded to workplaces and even neighborhoods. Lobster Dogs’ food truck has brought its fare to New Hanover Regional Medical Center offices in Leland as well as several apartment complexes and HOA-governed neighborhoods.

“With COVID restrictions they are reaching out to food trucks more, to be able to offer restaurant food without [residents] having to go out,” said franchise owner John Suttle.

Food trucks have found success despite dealing with problems inherent in the business. Suttle said his biggest obstacle was finding commissary kitchen space. That’s true for other mobile purveyors who do not have a restaurant connection. Even restaurant food trucks need a health department-approved spot where they can drain water and grease, if the truck can’t get access to those facilities in the restaurant’s kitchen.

Truck repairs end up being a big problem, according to Faulkner, who cited generator breakdowns in particular as a recurring headache for the trucks she employs.

Another challenge for food trucks is marketing. Cornelius said these small operations are necessarily focused on their day-to-day operations, leaving little time to update websites and Facebook pages.

The difficulty in following the movements of favorite food trucks – or even just finding a nearby food truck at lunchtime – inspired the staff of Wide Open Tech to launch Food Truck Track.

“It’s hit or miss to find that information,” Cornelius said in an interview in December. “It’s not all in one place, and sometimes it’s not up to date. We’re trying to make it easy for the truck owner, the venue owner. We update the information and let people know what’s going on.”