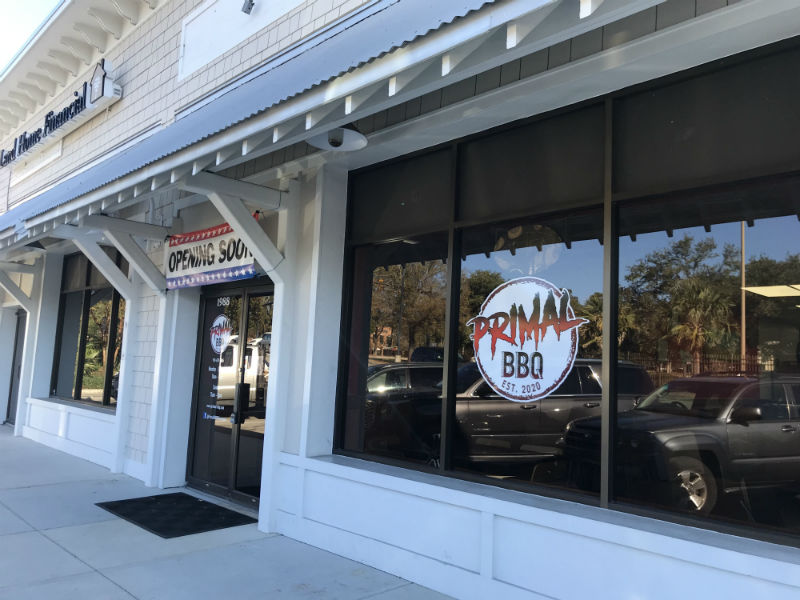 Primal BBQ at Lumina Commons off Eastwood Road is expected to open this month. (Photo by Cece Nunn)
Almost a year since signing a lease for his space in Lumina Commons, James Romano is putting the finishing touches on Primal BBQ and planning a soft opening for mid-December.

Romano experienced a wide range of delays, including unforeseen repairs and construction setbacks due to COVID-19, as well as a general concern for opening a new restaurant during a global pandemic.

But Romano is confident that between the news of vaccinations on the horizon and the fact that his model works well for carryout, his concept will be well-received.

Romano has a wide range of experience in the restaurant industry, having worked both front- and back-of-house positions since the age of 16.

He said it was his experience as the general manager of a high-volume fast food chain that taught him the importance of controlling food and labor costs, two aspects of the business he feels are essential for the success of a restaurant.

“I learned so much from that position but I didn’t enjoy the work,” Romano said. “I figured if I was going to be putting in all that work I might as well be working for myself.”

Romano was also part of the opening team at Whole Foods in 2012, serving as kitchen manager. He said it was there that he developed much of his current skill set, working with smoked meats and a wide range of side dishes.

“Italian food has always been my comfort zone,” Romano said. “But there’s enough of that here in town. I felt like for an Eastern North Carolina town, barbecue is really under-represented.”

Romano has been experimenting with smoking meats at home for years, but when it was time to select a smoker for the restaurant, he selected the same one he used at Whole Foods, an Ole Hickory convection-based unit for which he will use three types of wood to smoke his meats: hickory, applewood and cherrywood.

Sides will include braised cabbage with bacon, cole slaw, beans, mac and cheese and mashed potatoes, with additional rotating selections down the road.

“We’ve put a lot of time into perfecting our smoking process,” Romano said. “And I think people are really going to love our sauces.”

Primal will serve USDA Prime brisket and all of the wings will be brined, coated in a rub, smoked and then fried before being tossed in sauce.

Romano plans to have a blackboard menu that will change slightly each week, and customers can access a QR code to pull up the current menu at any time or follow Primal BBQ on social media for current offerings.

Romano said that in addition to serving delicious food, his focus is on providing top-notch customer service in a welcoming environment.

Primal will have seating for 24 guests under the current guidelines, as well as a few outdoor tables at the front of the restaurant.

Catering for larger orders is available with a 24-hour notice, and designated curbside pickup parking will be available.

Primal BBQ is located at 1988 Eastwood Road in Lumina Commons. Follow @PrimalBBQWilmington on social media for updates on opening dates and times.