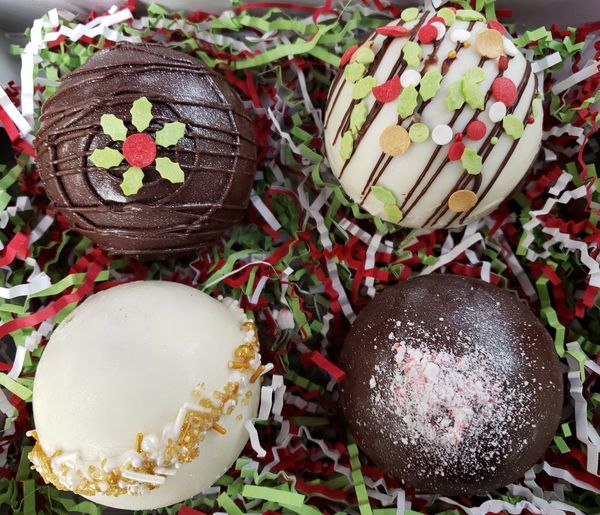 If you’re not yet familiar with this sweet sensation, hot cocoa bombs are chocolate balls filled with marshmallows, hot cocoa mix and other flavorings and decorated like Christmas baubles. When dropped into a mug of hot milk, the bombs dissolve into a steaming mug of hot chocolate.

Wiggans started her home-based bakery, whose name is an homage to her daughters, Lily and Iris, in June of 2019. It was a way for her to be a stay-at-home mom and help support her family at the same time.

She said she's been amazed at the growth of the business so far, but going into what should be her busiest season, she realized she had very few holiday orders on the books.

After seeing hot cocoa bombs pop up on many of the baking blogs she follows, Wiggans decided they might be just the thing to help bolster holiday business.

“Normally everything I do is customized,” Wiggans said. “The whole reason I got into this was to give parents an affordable option for custom sweets. But people just aren’t hosting parties and large gatherings right now so this has really helped to fill the void.”

Wiggans said the options are limitless when it comes to creating flavors for the bombs, but to streamline things for her first season carrying them, she came up with six feature flavors: traditional milk chocolate with mini marshmallows, white chocolate, Ying-Yang with white and milk chocolate, peppermint bark, French vanilla cappuccino, and the Grinch, a green-tinted white chocolate shell with Lucky Charms mini marshmallows.

All of the bombs are prepared with Ghiradelli chocolate and cocoa mixes and each is uniquely decorated to match its theme.

“No two batches are exactly alike,” Wiggans said. “They make great gifts because they’re so pretty.”

Wiggans said many of the orders coming in will be used as stocking stuffers, teacher gifts and gifts for co-workers.

The best way to place an order is through the Flour Power Sweets and Confections Facebook page, via private message. The bombs are $5 a piece, and now through the end of Small Business Saturday, Nov. 28, customers will receive $5 off for every $25 spent.

Wiggans is asking that orders be placed a week in advance of the desired delivery date. The bombs have about a three-week shelf life and need to be stored somewhere cool, but not refrigerated.