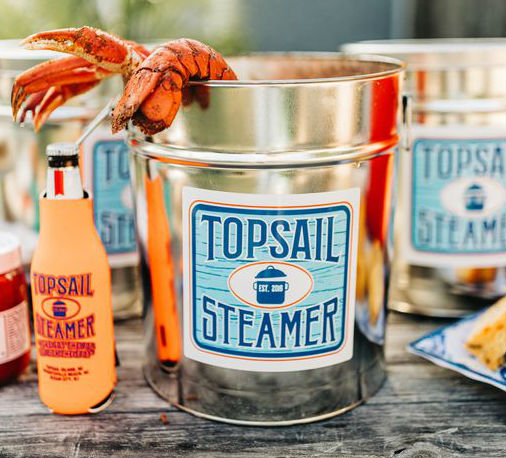 “We’re keeping this next Topsail Steamer store in the family,” said founder and CEO Danielle Mahon, who owns the flagship Surf City location as well as the Wrightsville Beach and Ocean City, New Jersey, locations.

Mahon’s sister Lauren Gove and brother-in-law, Brian, are the proprietors of the new Long Beach Island store. Prior to opening their own location, the Gove family helped to open Ocean City this past May.

“New Jersey is where we grew up,” Mahon said. “And so now having two stores in the state, operated by family members who live locally, just makes it even more special for us.”

Mahon said the Ocean City store far exceeded her expectations for business over the summer months.

“By the nature of what we do, I think it provided a great solution for families during quarantine and for families that were visiting the shore but were unable to go out to eat as they normally would,” Mahon said.

Topsail Steamer has created a special Shrimp Shuttle truck that ferries freshly caught North Carolina shrimp up to the New Jersey locations as part of their commitment to assuring high-quality seafood, locally sourced when possible.

In March of this year the company partnered with Goldbelly, a Manhattan-based online retailer that specializes in shipping regional gourmet food experiences nationwide.

“The timing could not have been better in light of what has happened,” Mahon said.

At a time when many in the food and beverage industry were having to lay off staff, Mahon had to hire several new employees to handle the increase in business.

Since the start of the pandemic, Topsail Steamer has opened two brick-and-mortar locations, and has shipped steam pots to all 50 states via Goldbelly.

Mahon said that plans are in the works for a fifth location in Sea Isle City, New Jersey, to open in the spring of 2021, and she is also looking at adding additional locations in the Southeast in the coming year.

Pizza meets gelato at the edge of Wrightsville Beach