The Bodega Market Slated To Open This Fall 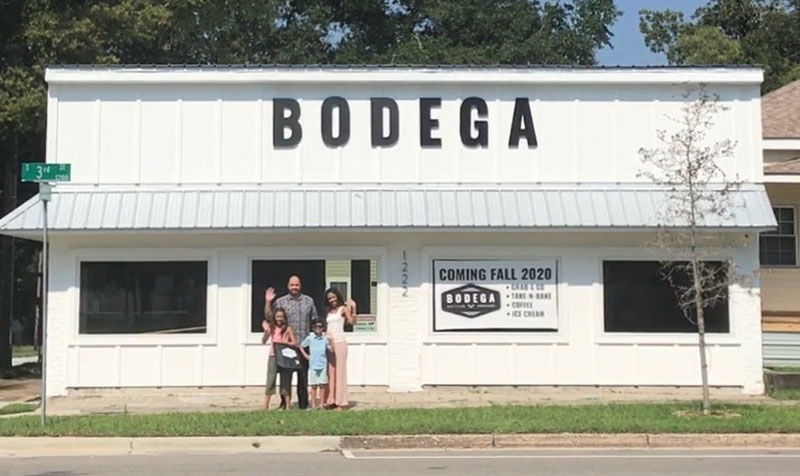 The Hornes purchased the building at 1222 S. Third Street in 2018 and have just completed the build-out, having utilized the building’s original materials, along with reclaimed wood and salvaged materials from across the state.

“We wanted to preserve as much of the historic aspect of the building as possible,” Ryan Horne said.

He said the building, which has been boarded up for the better part of two decades, was home to a speakeasy during the Prohibition era, followed by Tiny’s Grill from the 1960s through the 1980s.

“It’s important to us to honor the history of the area and the commerce and community of that existed there,” Ryan Horne said. “We hope to revive that.”

The Bodega Market will be a new venture for the Hornes, who have longed to embark on a family-run small business in which they could involve their children and teach them the fundamentals of business ownership. Ryan Horne is the founder and managing director of Seagate Wealth Management, and the family has lived in the Port City for 20 years.

“I talked my wife into buying the building and sold her on the idea of a basic produce stand, knowing that there is a need for fresh food and produce downtown,” Ryan Horne said. “But it has already evolved into more than that, and we hope it will be a place for people to gather. We’re very excited to be part of revitalization of the area.”

He said the market would focus on grab-and-go and take-and-bake items, as well as ready-to-eat sandwiches, salads and breakfast items. There will be an assortment of artisan products such as honey and pickled vegetables, and the market will serve coffee, ice cream and local craft beer and wine that can be purchased for on- or off-site consumption.

A family-friendly, dog-friendly outdoor space with Wi-Fi is planned, where customers can enjoy a bite to eat or drink.

“I hope it will have an indoor farmers market feel,” Ryan Horne said.

The Hornes have partnered with Max and April Sussman of The Veggie Wagon for the majority of the items they will stock initially.

“Our decision to carry Veggie Wagon products stems from their dedication to excellence and ability to deliver high-quality products to the community,” Ryan Horne said. “We want to bring those same products to the South Front District, and they have it all.”

The Hornes hope to open The Bodega Market this fall.