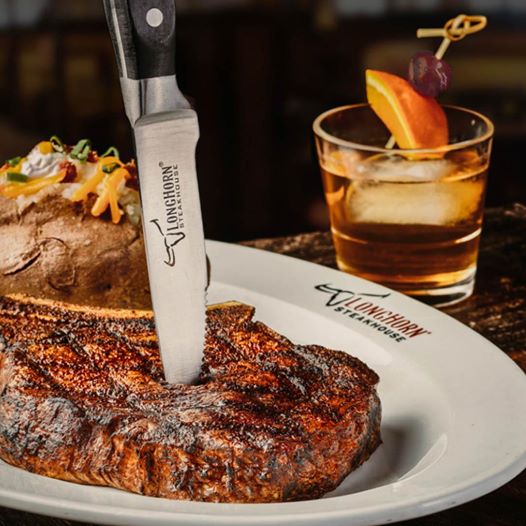 “We’re incredibly honored to receive that recognition,” said Brittany Baron, communications manager for LongHorn Steakhouse, which operates more than 520 restaurants in 42 states, including a Wilmington location at 925 International Drive in Mayfaire Town Center.

The ACSI Restaurant Report 2019-2020 examines the implications of customer satisfaction benchmarks for major companies in the food services sector, including popular fast food and full-service restaurants that serve the U.S. consumer market.

LongHorn Steakhouse became the new full-service leader with an ACSI score of 81 out of 100. Last year’s industry leader, Texas Roadhouse, tumbled 4% to a score of 80, while after holding second place in 2019, Cracker Barrel also fell 4% to a score of 79.

Both Texas Roadhouse and Cracker Barrel now sit at their lowest-ever ACSI scores.

Despite a 2% drop, Chick-fil-A remains the industry leader at a score of 84 and Domino’s topped pizza charts for the first time since 2009, beating Papa John’s, which experienced a 3% decline to a score of 78 and Pizza Hut which dropped 4% to 77.

Little Caesars dropped by just 1% but remained in last place among the pizza chains at 76.

Among the 18 fast food brands measured a year ago, 11 experienced a decline in customer satisfaction, but most of these changes were at 2% or less, according the ACSI.

Despite the overall decline, ACSI analysists expect the fast food segment is positioned to better fare the COVID-19 pandemic than full-service restaurants, thanks to business models that already include low-contact drive-thru lanes and delivery.

The organization reports that U.S. restaurants lost $120 billion from March to May 2020 as social distancing and mandatory lockdowns upended the industry during the current global pandemic. Leading up to that point, however, customer satisfaction with both full-service and limited-service restaurants was already in decline, according to the report.

“Even before COVID-19, delivery was fast becoming the name of the game with consumers increasingly looking for alternative delivery options,” said David VanAmburg, managing director at the ACSI. “Millennials drove the ship, and the rise of third-party delivery services like Grubhub, DoorDash, Postmates and Uber Eats offered consumers more choices and convenience.

"But the pandemic has since hammered the point home: Tech innovation remains a key to success for both fast food and full-service chains, and engaging with customers digitally, especially through reliable mobile apps, is critical.”