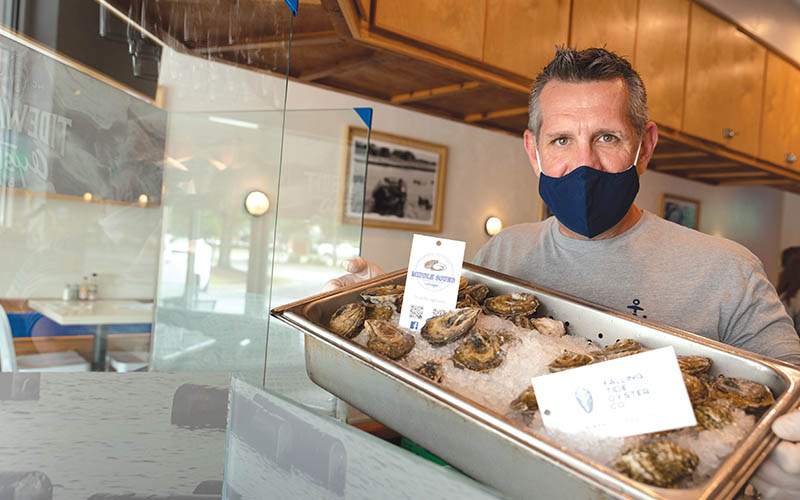 And while some restaurants have gone out of business, and some are still temporarily closed, others are expanding.

“When we first went into this, the pandemic had not yet impacted us locally,” Pickens said. “The legal work was complete and the lease was signed, but we had no idea what the impact was going to be or how long it would go on.”

Fortunately for Pickens, construction and preparations continued throughout the quarantine period, and he and his staff were ready to open at the start of phase two.

“Our main concern is keeping our staff and customers safe,” he said. “From a business perspective we’re doing everything we can to provide a safe environment.”

Located in the former K-Bueno Norte space just across Market Street from Kornerstone, Tidewater Oyster Bar features North Carolina seafood with a nod to the Cajun and Creole cuisines of Louisiana. Pickens said he’s proud to be supporting local shellfish aquaculture and offer oysters from local farms such as Falling Tide Oyster Co. of Sneads Ferry.

Pickens said the response so far has been positive.

“Fortunately things are really starting to take off,” Pickens said. “We’re just trying to maintain a positive mindset while being mindful of the situation.”

Following several months of renovations at 2 Market St., Floriana opened at the end of April for curbside pickup and delivery. While it was not the grand opening they had hoped for, Branda and executive chef Daniel Hlusak decided that the time had come to open with a takeout menu.

While they were unable to host a traditional friends and family soft opening to introduce themselves to the Port City, Branda said Floriana instead donated over 200 three-course meals to New Hanover Regional Medical Center, as well as firefighters and law enforcement officers, and gave away meals to Facebook followers.

“It was not the way we planned it, but we had the tools in place,” Branda said. “If there’s one thing I’ve learned in this industry, it’s that if you can’t adapt, you’re not going to thrive.”

Branda said the transition to dinein service has gone well, despite only being able to serve at fifty percent capacity.

“As frustrating as it is to not fully open, there is good reason,” Branda said.

Floriana Restaurant’s D.C. location was voted into the Top 10 Most Romantic Restaurants in D.C. for 2015, and the Wilmington location has been designed to follow suit, with balcony tables overlooking the Cape Fear River, as well as three distinct areas of service, a traditional bar area, a lounge that serves small plates and drinks and the formal upstairs dining room. The Italian bistro serves dishes made with seasonal ingredients sourced from local producers and specializes in handmade pasta, steaks, chops and seafood.

Branda said it’s impossible for him to fully gauge the financial impact of COVID-19 because as a new restaurant, in a new city, he has no previous sales with which to compare.

He said he has been encouraged that the restaurant is already starting to attract some regulars, which he said is a big part of Floriana’s business model.

“Comfort and relaxation are hard to come by right now,” Branda said, “and we hope to provide that.”

The restaurant industry continues to look for ways to improve its economic outlook. In a local effort called Downtown Alive aimed at helping boost restaurant and retailer business in downtown Wilmington, the Wilmington City Council on June 23 approved periodic street closures to allow businesses to expand their capacity outdoors for dining and shopping.

WHERE? Roads closed to vehicles during the times above are Front Street between Chestnut Street to Dock Street and the 100 block of Princess Street.

WHY? As a result of the state’s COVID-19 re-opening plan and to help downtown businesses economically recover, the city of Wilmington, in collaboration with the Downtown Business Alliance and Wilmington Downtown Inc., is launching the Downtown Alive event allowing restaurants to expand outdoor seating to safely serve customers (in accordance with the CDC’s social distancing guidelines), according to DBA. “Retailers may be joining in with expanded presence with their products. This program does not allow for social gatherings or loitering. Making a reservation with the participating restaurants is encouraged.”