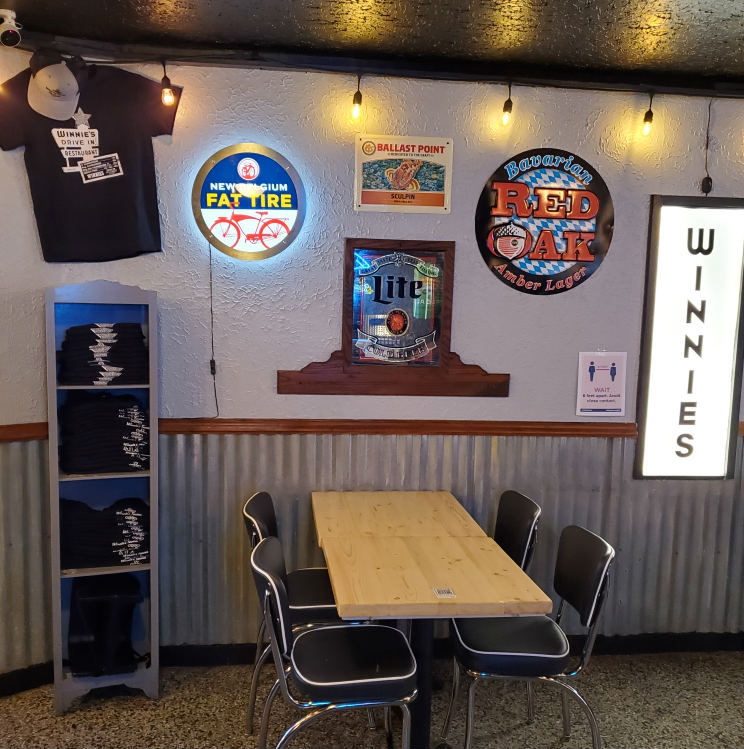 The tavern, which earned the Best Burger award in Encore Magazine’s readers poll earlier this year and was recently featured on the Food Network’s The Best Thing I Ever Ate for its Trailer Park Burger, operated with curbside pickup for a week or so before making the decision to close temporarily March 22.

Owners Wendy Fincher-Hughes, and her son and daughter Owen Hughes and Jessica Hughes, said they have used the time to make some significant updates to the restaurant.

“What started out as some minor updates ended up snowballing into some pretty major ones,” Wendy Fincher-Hughes said.

Fincher-Hughes said that while Winnie’s was originally known as more of a bar and grill or tavern, the clientele has changed over the years and now it’s considered more of a restaurant.

Renovations included significant updates to the structure of the kitchen and its equipment, as well as new bathrooms and a refinished bar.

“It was a good time to get things done,” Fincher-Hughes said. “We never would have been able to do this much during normal operations.”

Fincher-Hughes said that while the closure had a significant financial impact, the owners had been saving for a new walk-in refrigerator for a while, so instead of putting the money toward that, they shifted gears and came up with a new plan for updates. They also applied and received PPP and EIDL loans.

“We haven’t yet decided if we will use the PPP loan or return it based up on the changing guidelines,” Fincher-Hughes said, noting that the emergency funding from the EIDL has helped them to get reopened and have a bit of a cushion should something else come up.

Fincher-Hughes said she is happy to report that about 90% of her previous employees are returning to work.

“I pay them well and we try to do better than most,” Fincher-Hughes said. “I think they were more than happy to come back.”

Fincher-Hughes said she hopes that the public now has a better understanding of the restaurant industry based up on the impact that COVID-19 has had on the industry.

“I think a lot of attitudes have changed in regards to the service industry and our value has increased,” Fincher-Hughes said.

Winnie’s has made some minor adjustments to its menu and pricing for the time being based upon the limited availability of some ingredients, and the rising cost of beef.

“Anyone who has tried to buy ground beef over the past few months knows the price has gone up,” Fincher-Hughes said. “But I think our customers will still see us as a great value.”

Winnie’s Tavern is located at 1895 Burnett Blvd. and is currently open from Monday through Saturday from 11 a.m. to 9 p.m. and Sunday from noon to 4 p.m.

Correction: This version corrects the relationship between the owners of Winnie's Tavern.