Having quickly outgrown their former taproom on Eastwood Road, owners Robin and Art Hill were seeking a space where they could not only serve their kombucha on tap, but a variety of other beverages along with fermented foods.

The new space has eight kombucha blends on tap as well as 10 local beers. There is also a full liquor bar, allowing bartenders to create a wide variety of craft kombucha cocktails such as the Dirty Hippie, a blend of hemp-flavored kombucha, Dr. Stoner’s herbal vodka and hibiscus simple syrup garnished with micro-greens.

Robin Hill said her intention was to open quietly Saturday, but word spread quickly and the crowds rushed in. The kitchen had sold out of food by Sunday afternoon and was forced to close at 3 p.m.

When the announcement was made last September that Panacea would begin serving food, Hill said she felt the community was ready to consume more plant-based and fermented foods. 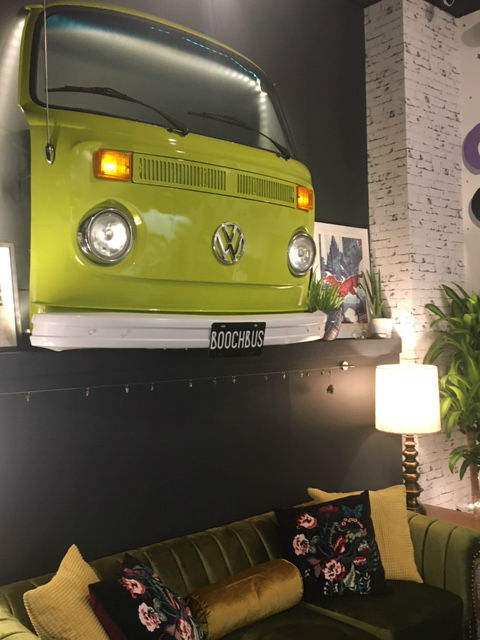 While nearly everything on Panacea’s current menu is vegan, Robin Hill said she and Art, a trained chef with over 20 years in the food industry, are not labeling Panacea a vegan restaurant.

“We’ll certainly be offering plenty of vegan options,” Robin Hill said. “And that’s a niche we want to stay in, but we don’t want to box ourselves in.”

The new space has a relaxing, lounge-like feel, with plenty of bar seating as well as tables and even some outdoor seating. The walls are covered in bright murals by Erica Nelson of Mural Modern, and customers will find a variety of items made by local artisans as well as some hard to find vegan and zero-waste retail products. Also on display are several kombucha cultures.

“Some people find it fascinating,” Robin Hill said. “Others are kind of creeped out by it.”

Panacea will host a grand opening celebration at their new location Sunday, Feb. 2 featuring a live painting event with Erica Nelson. Nelson will be creating a canvas painting that will be sold in silent auction to benefit Wilmington’s chapter of the Plastic Ocean Project. There will also be a performance by Komorebi Fire Arts as well as live music and grand opening specials.

The kitchen as Panacea is open every day but Monday, and the taproom is open daily from 10 a.m. to 9 p.m.