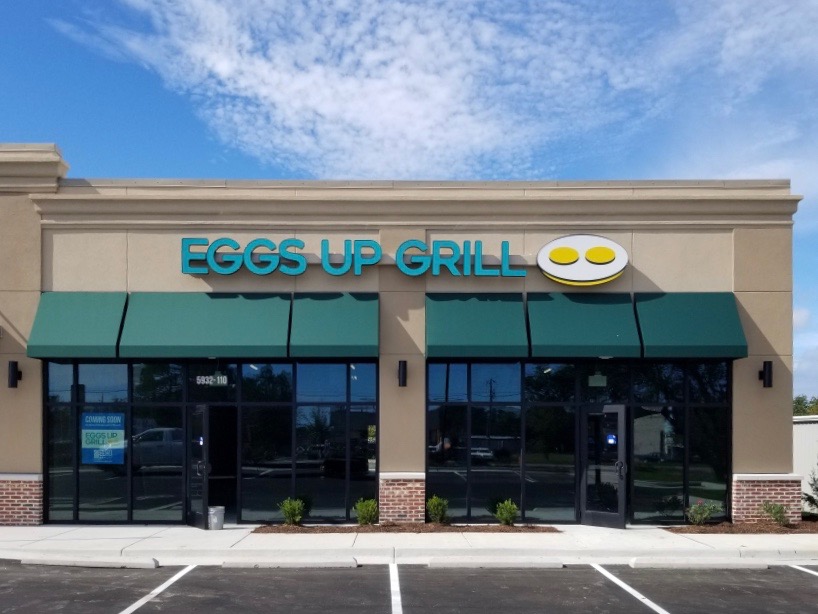 Eggs Up Grill at Beau Rivage Marketplace is expected to open Jan. 20. (Photo courtesy of Eggs Up Grill)

One of six area Eggs Up Grill locations is set to open at Beau Rivage Marketplace on Jan. 20.

Ricky Richardson, CEO of the restaurant, announced the multi-unit deal last September, under which local residents Mary Ashton and David Dukes will own and operate this and five additional locations throughout the Cape Fear region. At that time, Richardson also confirmed the opening of a Shallotte location, under the ownership of a separate franchisee.

The restaurant is part of a newly constructed two-tenant outparcel at Beau Rivage Marketplace, which will house Eggs Up Grill as well as MOD Pizza, a pizza eatery that opened its first Wilmington location in Ogden Market Place last August. Representatives from MOD declined to comment on when the Beau Rivage location is scheduled to open.

Eggs Up Grill serves breakfast and lunch and was founded in Pawleys Island, South Carolina, in 1997 by restaurateur Chris Skodras.

Both Mary Ashton and David grew up vacationing at Pawleys Island and eating at the restaurant.

“We’re really passionate about the brand and think it’s a great fit for the Wilmington area,” Mary Ashton Dukes said.

Known for serving “eggs a million ways,” some of her favorites include the Goodness Gracious omelet with egg whites, spinach, onions, mushrooms, feta cheese and sliced tomatoes, and the hash benedict served on an English muffin with two poached eggs, corned beef hash and hollandaise sauce.

For breakfast, Eggs Up Grill also serves grilled blueberry muffins, avocado toast, specialty pancakes and French toast, biscuits and gravy, breakfast sandwiches and loaded home fry bowls. The lunch menu offers burgers and sandwiches, salads and soup. There is also a kid’s menu for children 10 and under, and gluten-free items are available.

Heart healthy and gluten-free items are noted on the menu and the full nutritional information for all of Eggs Up Grill’s dishes is available on its website.

There are currently two Eggs Up Grill locations in the Raleigh area and one in Charlotte. Richardson said there will be a total of eight North Carolina locations by the end of 2020.

The 100-seat restaurant will serve breakfast and lunch from 6 a.m. to 2 p.m. daily. Follow Eggs Up Grill Wilmington on social media for opening day updates.