Vivian Howard Discusses Her Next TV Show And Juggling It All 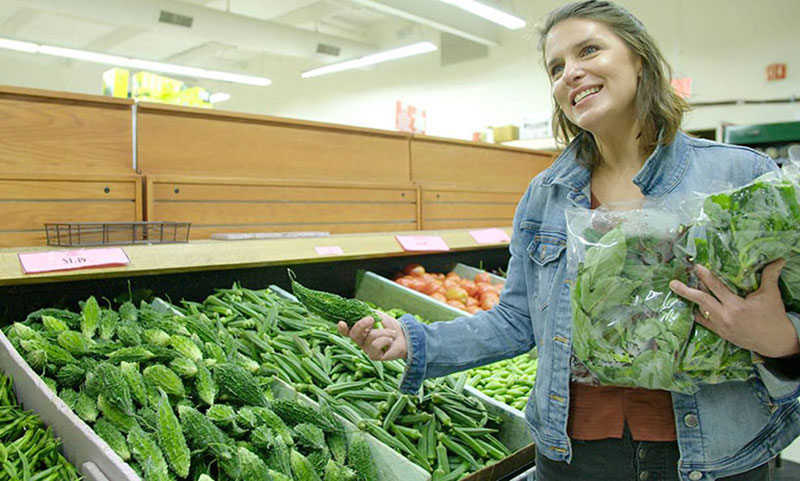 Vivian Howard is shown in a production still from her upcoming food series ‘South by Somewhere’, a six-part series set to start airing on PBS in March. (Photo by Josh Woll/PBS)
Chef Vivian Howard shared details of her upcoming television series during a talk in Wilmington on Wednesday.

South by Somewhere is set to begin airing on PBS in March, said Howard, who spoke at the Wilmington Chamber of Commerce’s Women’s Professional Development Luncheon event.

Howard and her team have been working on the six-part series for about two years. It comes on the heels of her last PBS show A Chef’s Life, which aired between 2013 and 2018, and picked up Daytime Emmy, Peabody and James Beard awards along the way.

That show featured the experiences of Howard, who also has earned several nods from the James Beard Foundation as a semifinalist for best chef in the Southeast, and her husband, Ben Knight, running their Kinston restaurant Chef & the Farmer and the seasonal food from their menus as well as from the farm fields and kitchen tables of Eastern North Carolina.

Howard and Knight in late 2017 also expanded to Wilmington when they opened Benny’s Big Time Pizzeria in the South Front District on Greenfield Street.

On the heels of A Chef’s Life, Howard again travels around Eastern North Carolina and other parts of the South for her second TV project, but this time, the scope is broader.

“If you’ve watched A Chef’s Life, you know that every episode was about an ingredient,” Howard told the audience of about 400 at Wednesday’s event. “And every episode in this new show is about a dish that every culture shares.”

That includes episodes on porridges, pickles and dumplings – and the different cultural takes on them.

“Really the goal and the reason I wanted to do this show was to kind of show us how we’re all more alike than we are different through the foods that we share,” Howard said. “I’ve learned so much doing this particular new iteration of A Chef’s Life because it will look and feel the same, but it has a slightly different focus.”

The initial plan was to open a bakery in Kinston – they bought a building and started the process of getting it ready – when Hurricane Florence hit last September.

“All of our businesses, as I’m sure many of you can relate to suffered. We took a big hit,” Howard told the audience, adding that as a result, they decided not to open the bakery right now.

“The way that we always saw the bakery working was through this online shippable specialty baked goods,” she said. “And so I was like, ‘Why don’t we just flip the business model and start there.’ And that way we can raise money to have a little padding so when we do open this bake shop, it has a chance.”

The mail-order bakeshop launched in April with small-batch goods.

“It’s all online, and we make 500 of all the things that we’re selling. We launched a summer s’mores kit last night, and we have like five left,” Howard said. “The thing I like about it, that people have responded to, is it’s limited edition.”

The focus of Howard’s keynote talk was juggling the demands of her career, public persona and family.

With several restaurants, best-selling cookbook Deep Run Roots, a new television project and kids at home, Howard said she has learned what it means to better manage her life.

“I learned a very important lesson in writing Deep Run Roots on how to manage moving forward. And that is, for me at least, to accept that you’re not going to be great at all things at all times,” she said. “The things that I am trying to do at any given moment, whether it’s being in a [cookbook] signing line with strangers I’ve never met, or if it’s making a completely different show on PBS, I try to do those things the best that I can.

“The way that I manage is by being highly productive and also accepting my limitations.”