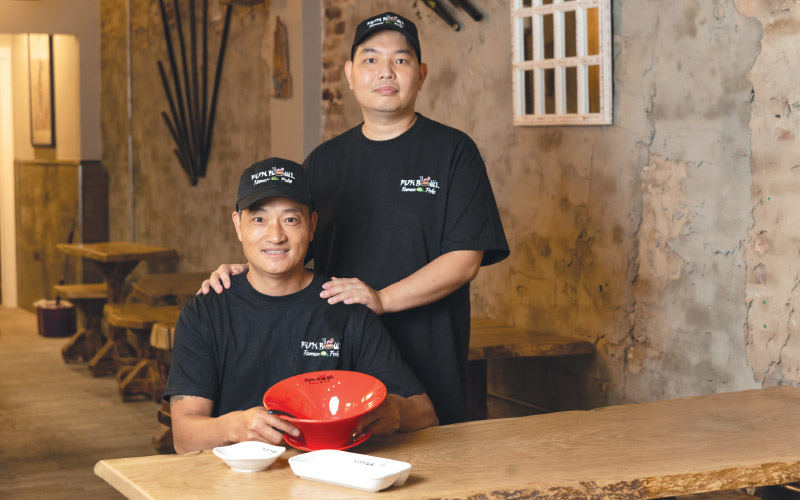 Johnny Chen (left) and his nephew Yuda Chen at Fun Bowl, in downtown Wilmington. The eatery is expected to open before the end of June. (Photo by Michael Cline Spencer)
A restaurateur who has made his name in sushi is expanding into another popular arena of Asian cooking: ramen.

Johnny Chen, the food entrepreneur who brought sushi to downtown Wilmington more than 15 years ago with his first Nikki’s restaurant, has again chosen downtown for his first ramen venture, Fun Bowl. The new eatery is slated to open June 24.

He has created, in the former Crescent Moon boutique space at 24 N. Front St., a quick-service diner specifically designed to showcase what he says will be fresh, made-toorder bowls of the popular Japanese noodles complemented by a choice of proteins. Vegetarian options are set to be available as well.

Unlike the extensive menus of Chen’s various Nikki’s locations, Fun Bowl will limit itself to 10 ramen dishes, with a daily special designed to expand customers’ experience with ramen tastes. Fun Bowl will also offer eight to 10 poke dishes, building on the growing popularity of the Hawaiian dish that piles chunks of fresh ingredients – including raw fish – onto a bed of rice.

The ramen dishes at Fun Bowl are barely in the same universe as what passes for ramen in the grocery store: microwave-ready, disposable cups filled with crinkled noodles and a high-sodium broth.

When he decided to pursue this culinary path about six years ago, Chen went to Japan, where he still has family. He studied the art of ramen-making and sampled widely until he determined his own tastes and the flavors he wanted to bring to customers in the U.S.

Creating traditional ramen is a time-intensive process of making the noodles from scratch and preparing a variety of fresh broths every day. But thanks to a $130,000 investment in high-tech equipment for the new restaurant, Chen said Fun Bowl will be able to turn out high-quality, customized ramen orders in a matter of minutes. For example, an industrial- size pressure cooker reduces the time required for broth preparation from eight to two hours, while ensuring a more consistent product, he said.

The development of Fun Bowl represents what Chen’s associate Eliza Santos calls his transition to retirement. Rather than managing the six Nikki’s locations and three Asian fusion restaurants, he is now designing and launching the eateries, and then turning them over to relatives.

His greatest interest is in the creation process, he says.

“It’s exciting. It engages my brain and gives me lots of energy,” Chen said. “I consider every detail – the furniture, the decor, the dishes. I enjoy my job.”

Although he’s been in the restaurant business for years and clearly has a formula for what works in every aspect of the operation, Chen still relishes envisioning and creating every detail of a new venture.

For Fun Bowl, he designed the dishes in which both ramen and poke will be served. He, with Santos’ help, selected artwork and furniture in the storefront space, which combines rustic and urban chic.

“He did this floor plan in 30 minutes,” said Santos of Chen’s Fun Bowl layout. “This is such a small footprint compared to his other restaurants.”

Once Fun Bowl is up and running, Chen will turn the operation over to his nephew Yuda Chen, an accomplished sushi chef who has worked to master the secrets of ramen. Yuda’s wife, Tingna, will run the front of the restaurant, while Yuda himself will preside over the kitchen. As with other of his restaurants he has sold to family members, however, Johnny Chen remains a guiding presence.

Johnny Chen’s restaurants are a family endeavor, Santos said. He has four brothers and a sister; many of their offspring are now active in the operation of their nine eateries – what Santos calls “the family franchise.” Some of their children, the third Chen generation, are helping out as well.

For his ramen business, he said, “My dream is to franchise,” adding that he’s dreaming on a national scale.

First he will perfect the downtown Wilmington operation and solicit feedback on the menu from his customers. Then he will look for opportunities in the region and beyond.

Johnny Chen was born in China but early on spent time in Japan, where he became familiar with sushi preparation as well as with ramen – a Japanese import from China that has since become inextricably associated with Japanese cuisine. Johnny Chen’s next stop was New York City, where he spent eight years in the restaurant business before migrating south to West Palm Beach and a position as a sushi chef in a fine dining restaurant.

After vacationing at a friend’s home in Surf City for a few years, he decided to move to the area, arriving in 2003 and bringing his passion for sushi with him.

When he had established himself and his family as local sushi experts, he looked to Brunswick County.

There are now two of his Asian fusion locations there – one in Southport and one in Calabash – and a third in Castle Hayne. Surrounded by second- and now third-generation Chens, the restaurateur aims to expand not only the family franchise but the palates of Southeastern North Carolinians.