A Taste Of Family, For 25 Years 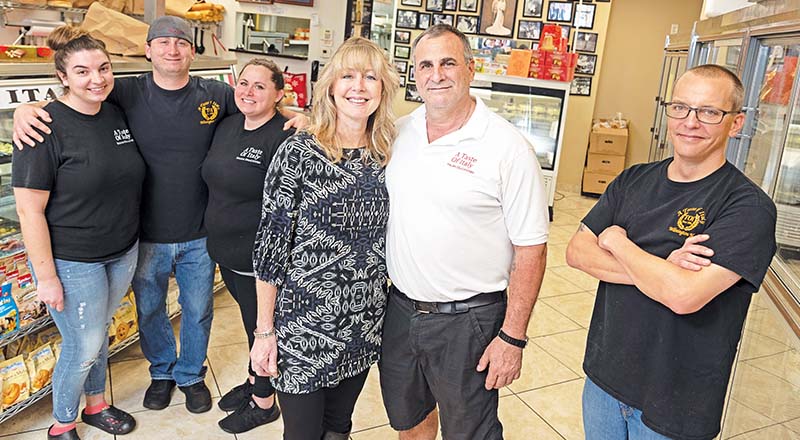 Marie and Chris Guarino (middle, foreground) are shown at A Taste of Italy with (from left) Patricia Russo, Carmine Guarino and Sammy Rodriguez as well as (far right) business partner Craig Berner. (Photo by Michael Cline Spencer)
When complimented for his or her cuisine, a chef may often respond, “The first ingredient is love.”

That sentiment rings true for Chris Guarino, who opened A Taste of Italy on South College Road in 1994 with his brother Tommy.

Today, Tommy is mostly retired, and Guarino and his wife, Marie, run the deli and specialty grocery, awaiting the right time to turn over the family business to the next generation.

“Family is a big, big thing,” said Chris Guarino. “I have a son who is down in Florida. He worked for me all through college, high school and everything, but now he’s down in Florida doing his thing. But, I have two of them that wouldn’t … didn’t … want to leave. My son, Carmine, he wants to be in the business.”

The others of the next generation are Chris and Marie Guarino’s daughter, Sammy, and Tommy Guarino’s son Tommy Jr. Sammy tends to help Marie more on the back end with scheduling and office work, whereas Carmine and Tommy Jr. enjoy all aspects of the business, including front-of-house.

“We’ve always had a couple of aces since 1994,” said Marie Guarino about employees over the years. “Now, my kids are old enough to be those aces.”

NECESSITY LEADING TO INVENTION
In the early 1990s, the Guarino brothers followed their Uncle Tony from New York to Wilmington with the intention on opening a business.

One day, they wanted to get a sandwich like they could find at many a street-corner deli back home. But Wilmington in the early 1990s offered no such indulgences.

Thus, A Taste of Italy was born.

The first A Taste of Italy was smaller than today’s, located in the strip mall behind the current location at 1101 S. College Road.

“We rented a tiny little space at first. We didn’t know people wanted to sit down. In New York, there’s not sitting down in delis in the ’90s and ’80s. You came in, got your sandwich and left. Down here, everybody wanted to sit down,” Chris Guarino said.

“When we started, we had a little steam table. There were meatballs, other things. And at 4 o’clock, it was done. After that, we just had sandwiches and stuff. Now, we have the grill open until 7 o’clock every night, sauteeing all kinds of things.”

The sit-down restaurant on Market Street lasted just a short time in the early 2000s, but gave Chris a wealth of experience alongside the professional chef who ran the restaurant’s kitchen.

Chris’ increased culinary abilities led to an expansion of the menu offerings at the original location.

“I keep telling him to cut back,” said Marie Guarino. “When we started, we did just basics. Meatballs, chicken parm, eggplant parm, baked ziti, lasagna. It has just grown because he would cook it for maybe a customer who always comes in and he would be like, ‘Try this,’ and then they’d like it and they’d ask for it next time.”

After more than a decade in their rented, undersized space, the Guarinos purchased a recently vacated, Kentucky Fried Chicken building in the parking lot of their initial location.

“We started small. We had 16 seats to begin with, then we expanded the whole place,” Chris Guarino said. “We’ve always had a line of groceries we brought down with us. Now, we have over 60 seats.”

But unlike the city it calls home, A Taste of Italy has not changed too much with the times.

The Guarinos take pride in the restaurant’s dedication to maintaining the quality of its culinary offerings, and its next-door neighbor means of doing business.

“We stay true to our product and our recipes,” said Marie Guarino. “We bend over backward to make our customers happy. They may call us in a pinch, and we do everything we can to follow through on that. Around the holidays, it has just exploded for us, which is such a blessing, but it’s hard to make it through those couple of weeks when you’re going crazy.”

DOWN THE (WIDENING) ROAD
As Chris and Marie Guarino look ahead, they plan for A Taste of Italy to continue with the next generation.

But whether it can stay in the building they own and that it has called home since the mid-2000s, may be in question with the proposed widening of South College Road.

“We’ve already been approached by the state,” said Marie Guarino. “They’re surveying the land. They’re coming, so that’s down the road a little.”

Regardless of the state’s plans, Chris and Marie Guarino do not plan to step away from the family business too soon.

“Well, if my kids would have gotten a job outside of A Taste of Italy, we maybe could have stepped away a lot sooner,” said Marie Guarino. “But, no. Because of our kids.”

“They’re still young,” said Chris Guarino, continuing Marie’s thoughts like only family can. “I’m not even 60 yet. They’ve got a lot to learn.”