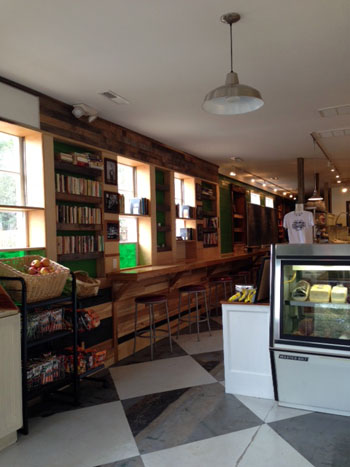 (Photo by Jessica Maurer)
Allister Snyder is committed to seeing his downtown Wilmington neighborhood thrive. Having lived on Red Cross Street for the past 10 years, the Wyoming native has just opened his second business on that same street, with hopes that this time the growing community of the Brooklyn Arts District will allow his restaurant to flourish.

Detour Deli, at Fifth Avenue and Red Cross Street, held a soft opening this weekend after nearly two years of renovations and planning.

“We still have some things to work out,” Snyder said. “But after a number of setbacks, I’m glad to finally open our doors.”

With Detour Deli Snyder feels he has something the neighborhood needs: more restaurants. And with a variety of unique sandwiches on the menu, there’s a little something for everyone.

Snyder purchased the 800-square-foot building that houses Detour Deli two years ago following the closure of the Library Bodega, his first business. Snyder said it was difficult trying to navigate both the city and the county’s requirements for permitting for the new deli. The building, though vacant for the past 15 years, previously housed an insurance agency, requiring Snyder to obtain a special use or change of use permit.

“It would be really beneficial if the city and county could streamline the process for new business owners,” Snyder said. “Something as simple as a checklist that they both agree upon would make things so much clearer. When there are so many steps involved and two entities to deal with there has got to be a cohesive set of steps to follow, otherwise the setbacks can be really difficult financially for a new business owner.”

Snyder’s is hopeful that his sandwiches will lure not only folks from his neighborhood but from throughout the city. He also hopes that the area will continue to grow and bring in more businesses, especially on the north side of the Brooklyn Arts District.

“Brooklyn’s north side is a great neighborhood,” Snyder said. “I love living here, but it’s still missing a lot of things and since I live here I couldn’t think of doing business anywhere else.”