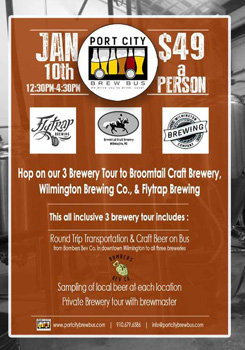 “In fact, we’re well beyond where we hoped to be at this point,” Mueller said. “We were able to run four tours at the end of 2014 so we got things rolling sooner than we originally expected. And we have a lot ideas for events throughout the new year.”

After the men launched an Indigogo campaign this past summer to help get their business off the ground, the Port City Brew Bus is now a reality. Mueller and Tomlinson are excited to help facilitate the enjoyment and education of beer in Wilmington.

Port City Brew Bus is now hosting bi-weekly public brewery tours in Wilmington to anyone 21 and over. The Jan. 10 tour consists of stops at Flytrap Brewing, Wilmington Brewing Co. and Good Hops Brewing, while the Jan. 24 tour takes in Flytrap Brewing, Wilmington Brewing Co. and Broomtail Craft Brewery. The all-inclusive three-brewery tour covers round trip transportation from Bombers Bev Co. as well as a private brewery tour and samples at each location. The cost is $49 per person.

Mueller said that as more breweries open they will be added to the tours and the starting point will rotate among bottle shops, such as Femental, Lighthouse Beer & Wine and pehaps a Carolina Beach location.

“We feel that three breweries is the right number for a tour in order to spend adequate time at each,” he said.

Each brew bus tour guide is a craft beer aficionado who will work alongside the brewers to provide information, and each brewery will highlight a different aspect of brewing, according to Mueller.

Tours run from 12:30pm to 4:30pm. Snacks and water are provided, but there is not a stop for lunch, so patrons are encouraged to eat before the tour begins.

Port City Brew Bus has partnered with the Blockade Runner Resort in Wrightsville Beach to offer a Port City Brewery Package. The first weekend package will be available Feb. 6-8. Mueller says he hopes to partner with additional hotels for similar packages as Wilmington’s brewery tourism grows.

Private tours and events are available as well as gift certificates. Click here for more details.