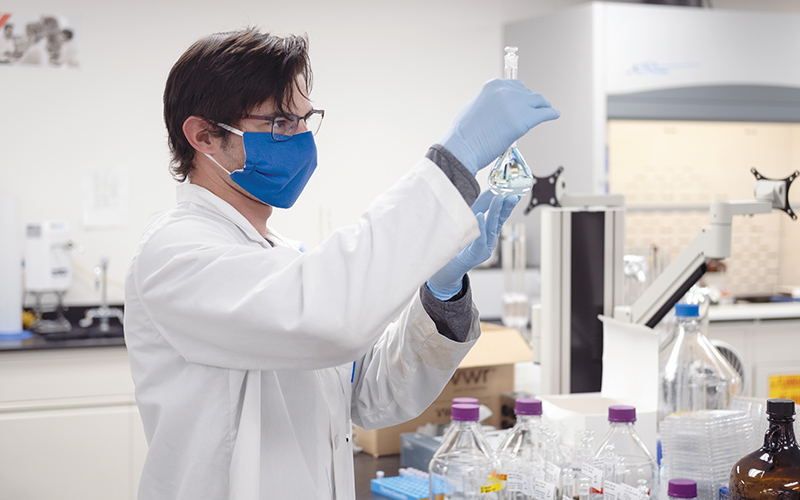 In a photo from 2020, Hunter Lewis works at Quality Chemical Labs. A recent economic development report said the life sciences industry in New Hanover County faces challenges, including skilled worker demand.
A new economic development report has provided New Hanover County and other stakeholders with a guiding vision to steer future retention, expansion and attraction efforts in the region.

The first formal economic development report issued in an eight-year period, Greenfield Development’s extensive analysis is a refresh and update of the county’s first-ever report commissioned in 2014, Garner Economics’ “Pathways to Prosperity.”

Greenfield’s partners, Robin Spinks and Mary Lilley, penned the “Economic Mobility” report, underscored by the observation of a shrinking middle class and an unbalanced economy. “The county’s economy is no longer in balance and provides no mobility pathway for the lower income workers to advance,” the report states.

When presenting the report to commissioners April 18, Spinks told the board the county had already tackled what would have been her “number one” recommendation: better coordination among economic development agencies. Garner Economics issued a searing take on the local economic development scene in its 2014 report: It identified no perks, a “low level of cooperation” among various agencies doing the work and limited community awareness.

“You all fixed that before we got started,” Spinks said.

During the 2021-2022 budget approval process last summer – in addition to commissioning the $60,000 Greenfield report – the county financed a new initiative with the Wilmington Chamber of Commerce, allotting $181,000 for the first year of a three-year program to target existing small businesses’ retention, expansion and recruitment needs.

The county also brokered an effort to enhance coordination among the economic development agencies it funds: Wilmington Downtown Inc., Wilmington Business Development and the chamber. County manager Chris Coudriet described the umpiring as: “Who’s on first?

“Last year, there was a concerted effort to bring our economic development partners together and make sure everybody understood whose role was what,” he said.

The process addressed potential duplication of resources, Coudriet said, offering clarity for each organization to understand their unique roles. “It’s been good,” he said. “It’s probably not very wise that it took us as many years as it did to figure out we probably need to convene this.”

With the agency coordination handled, Spinks’ and Lilley’s remaining recommendations weren’t prioritized: The team left the suggestions up to the county to rank based on its assessment of achievability. County staff are due to produce that list soon, along with a target timeframe to check back in on progress made in the Greenfield report.

The Greenfield report narrowed down the region’s primary target sectors as: existing business expansion, warehouse and logistics, life science manufacturing/pharmaceuticals, digital technology companies, offshore wind and the film industry. These target sectors were determined by Greenfield’s review of ensuring the industries supporting mid- to highwage jobs were growing and were traded sectors (sectors that bring outside money into the community).

“In any given year in any given place, at least 50% of your announcements come from existing industry,” Spinks said.

These primary assets represent offerings the region has that are “substantially different” than other competitive communities, Spinks said. Support assets are those that help the critical assets. These support assets identified include: a small-hub airport, low tax rates, innovation network, transportation network, educational institutions, natural gas availability and small MSA.

Around 2000, “If you lived here, you had to go somewhere else for a job,” Spinks said. “That’s changed a lot. We hope that continues to change. We hope that bringing in a diverse array of middle- and high-income jobs will allow them to have opportunities to stay here.”

The University of North Carolina at Wilmington is much better aligned with the jobs the area has to offer than it was decades ago, she said, while still noting the university system is less reactive to economic changes.

With Thermo Fisher's anticipated sale of the former PPD building downtown, the community could benefit from capturing the company's investment attention elsewhere, Spinks said. The region now has an opportunity to lure Thermo Fisher into investing in a local pharmaceutical manufacturing facility – two are already underway in N.C. “The only limitation with larger pharmaceutical manufacturing facilities is land availability,” she said.

Other existing life science organizations, Quality Chemical Labs and Alcami, provide high-wage opportunities. This cluster could continue to grow but faces difficulty with recruiting skilled chemical engineers. The Greenfield report identifies the possibility of a school within the university system (not necessarily UNCW) establishing an outpost in the area given the depth of need for this type of engineering training to service this growing sector.

The absence of Thermo Fisher from the downtown building presents a “fabulous opportunity” to attract one or more tech companies to occupy the commercial office space, Spinks said.

Also, major opportunities exist to service the nascent offshore wind industry, especially with the federal auction for the Wilmington East Wind Energy Area coming May 11. This industry will prop up the region’s already existing “blue economy,” Spinks said. Boatbuilding and repair – identified as an “other” target sector in the report – could immensely benefit from this push. Federal law requires all offshore wind supply boats to be manufactured in the U.S., and at present, “none of them are,” she said.

Remote work has driven up population growth as employees have relocated to more desirable places to live. With the area’s beach communities functioning as a second-home haven for national and state business executives, Spinks recommended the Palm Beach recruitment method: The town has undertaken an effort to identify valuable homes, determined what business the owners were attached to, then cold-called on those businesses to invite them to relocate or expand their work in the community. “Amazingly, they have been very successful at that particular method,” she said.