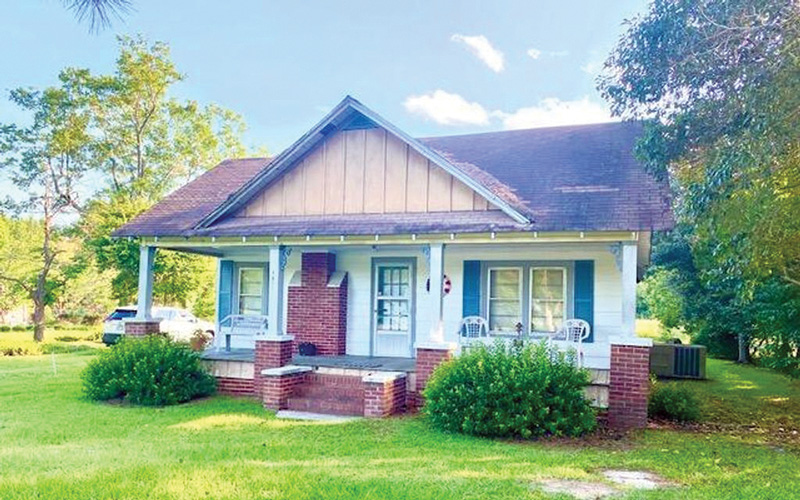 The home at 1920 Sam Potts Highway in the Columbus County community of Hallsboro is listed for sale for $130,000. (Photo c/o Southeast Properties Real Estate)
Although buyers can find lower prices for some homes in rural Southeastern North Carolina versus urban areas, those housing markets face similar challenges in the current economic climate.

Jens Lutz, broker in charge of Bladenboro-based Southeast Properties Real Estate in Bladen County, has been a member of the Brunswick Association of Realtors for nearly 20 years.
Lutz shared his views recently on the state of the rural housing market.

“We have seen a drastic slowdown in buyer activity mostly due to increased inventory and rising interest rates,” Lutz said.

In September, according to statistics compiled by BCAR from the N.C. Regional Multiple Listing Service, the average sales price in Bladen County decreased a tiny bit, by less than 1%, from $193,967 in September 2021 to $192,488 in September 2022.

But as in larger areas, sellers are having to adjust their expectations, in a big way in some cases.

“We are actually seeing a large amount of price reductions that I would speculate [are resulting] from the increased inventory and interest rates which affect buyers’ purchase ability and sellers’ price points,” Lutz said Nov. 8. “For the past couple of years, pricing has been driven by limited inventory supply and unprecedented low-interest rates; however, that has all changed now.”

Lutz said he expects such changes are here to stay, at least for a while.

For the Wilmington region including Pender, Brunswick and New Hanover counties, the number of homes sold dropped 25% in September this year compared to the same month last year. But prices rose considerably in September, the last month for which Wilmington-based association Cape Fear Realtors reported MLS statistics. The median sales price jumped 12.4% from $336,000 in September 2021 to $377,500 during the same month this year.

According to a National Association of Realtors’ report in November, an overwhelming majority of metro markets recorded home price gains in the third quarter of 2022 despite mortgage rates approaching 7% and falling sales.

“Forty-six percent of the 185 tracked metro areas registered double-digit price increases, down from 80% in the second quarter of this year,” the release stated. “The national median single-family existing-home price climbed 8.6% from a year ago to $398,500. Year-over-year price appreciation decelerated when compared to the previous quarter’s 14.2%.”

Slowed home price growth will continue until mortgage rates stop rising, said NAR Chief Economist Lawrence Yun in the release. “The median income needed to buy a typical home has risen to $88,300 – that’s almost $40,000 more than it was prior to the start of the pandemic, back in 2019,” he said.

As a result, the housing affordability crisis impacting the region and the U.S. has worsened, national and local officials say.

It’s a situation that is on the radar of nonprofit and government agencies but has no easy answer.

“Over the last 40 years, home prices in Southeastern North Carolina have increased at a rate of 22% faster than the rest of the state. This increase is driven primarily by New Hanover County (second highest in the state), in which home prices are increasing annually by 5.2% since 2013,” according to Cape Fear Collective, a social impact nonprofit organization that uses data as a tool to address community needs.

The collective also reported that seven out of eight low-income North Carolina residents pay more than a third of their income on housing.

Samira Davis is a Realtor who is also with Southeast Properties Real Estate but sells real estate throughout Southeastern North Carolina, including in Columbus County. She said in November that she’s been working on an effort in Whiteville, the county seat of Columbus, to create tiny homes.

“For some people, there is an urgent need, but there is a lack of affordable housing, so we have to look at how we can deliver that for both urban and rural areas at low cost,” she said.

Overall, the buyers she’s been working with lately tend to have cash, Davis said.

“We’re seeing a reduction in inventory for sale and an increase in the cost of capital,” she said, “and I think a lot of people could get caught in the crossfire if you’re looking to purchase your primary home and you’re purchasing with financing.”

Fixer-upper homes in rural areas are being sold to investors who can pay cash because lending guidelines on houses in need of renovations mean first-time homebuyers or those who need conventional loans have a difficult time qualifying, she said.

At the same time, price increases in urban counties are having an impact on their more rural counterparts.

“New Hanover County has made it almost impossible for many entry-level and working professionals to afford a home,” Davis said. “They can’t even afford to rent. I have the same phone call every day of the week, with someone looking for something under $1,300 or $1,400 [per month] to rent in New Hanover County.”

That price point doesn’t seem to exist anymore in New Hanover, she said, and as rents and sale prices remain on the rise, both renters and buyers will continue to be pushed “to the outlying areas.”