Picking At A Housing Knot 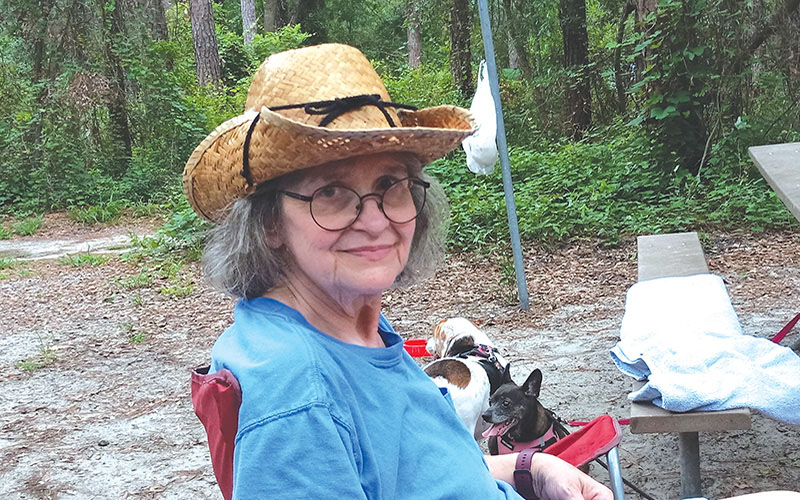 Wilmington resident Tanya Self has found obstacles in the search for an affordable new home for herself and her 17-year-old Chihuahua. (Photo c/o Tanya Self)
Tanya Self considers herself a good tenant.

But she finds herself in a precarious situation: Self needs a new place to live in Wilmington with Maya, her 17-year-old Chihuahua, but she hasn’t been able to find one that fits her budget because of bad credit.

Her husband, whose name was on her current lease, died in May, and her bad credit means she no longer qualifies for the Wilmington senior housing apartment it took the couple 22 months to get into when they moved here four years ago from Atlanta.

Self, who said she doesn’t blame her landlord for her problem, has to be out by Nov. 3, and she has struggled to find anything.

“Not everybody has good credit, and I do not. Part of that was medical bills and poor decisions,” said Self, whose husband suffered from congestive heart failure before dying of an esophageal aneurysm. “They say that medical bills don’t count, but it does drag your score down. I would say 70% of mine is medical bills, and the other was high-interest credit cards that I used to buy medicine. It’s not like I have a boat or things like that. I don’t have a luxurious lifestyle.”

Even if she can find a situation that works, Self is just one of a growing number of people who can’t find a home they can afford to procure or keep in the Wilmington area.

The problem is a nationwide, tangled knot.

Recent efforts by elected officials and local groups have been picking away at it, but some say it’s not enough. On Oct. 3, the New Hanover County Board of Commissioners approved using $3 million to help fund a pair of projects that will create 152 new workforce housing units, 68 of which will be for senior households.

That money is the first installment of a five-year, $15 million commitment aimed at improving the county’s inventory of workforce and affordable housing.

Advocates previously tried for more. A potential $50 million housing bond would have created more than 1,300 affordable units and preserved 302 more, “with funds designed to be funneled to existing state and city programs or directly to developers or nonprofits on a case-by-case basis over a five-year period,” according to a Greater Wilmington Business Journal story in February.

The $3 million is encouraging, said Katrina Knight, a member of the joint city-county Workforce Housing Advisory Committee. “It certainly is progress. I think as a community we were disappointed that more wasn’t committed to affordable housing. A pretty broad group of advocates, including businesspeople, were really pushing for us as a community to commit more like $10 million a year. In that respect, we were disappointed not to be able to come to some sort of agreement around a figure that would be more transformational. Maybe we’ll still get there at some point.”

Knight said the community has to keep working on the knot.

“We have to continually be challenging ourselves to be creative and to think of other resources, of other mechanisms to bring more resources to bear, because we’re chipping away at it, but every day we are losing more [affordable] housing units than we are bringing online for the first time or bringing back online,” she said.

As a result of the county’s latest effort, East Carolina Community Development and Terrior Development will each receive $1.5 million in loans for separate Low-Income Housing Tax Credit developments, which will help keep these units affordable for at least 30 years, officials have said.

“These loans will be for 20 years at a 2% interest rate and were two of the six total proposals submitted to the county for consideration,” a county news release stated. “Proposals were evaluated based on their cost and ability to make an immediate impact, with funding recommendations coming from a cross‐functional team of New Hanover County staff and members of the Workforce Housing Advisory Committee members.”

According to the release, East Carolina Community Development, a nonprofit organization that specializes in creating affordable housing, is planning the Covenant Senior Housing complex with 68 affordable units in the Castle Hayne area. The complex is expected to cost about $15.4 million to build.

Terrior Development’s project, Estrella Landing, has an estimated price tag of $18.2 million and will bring an 84-unit affordable housing complex off Gordon Road.

“Over the next few months, county housing staff will collaborate with the Joint County/City Workforce Housing Advisory Committee, the Board of Commissioners and other stakeholders to refine the priorities and criteria for the next round of funding, currently anticipated at the start of the next fiscal year,” LaCoe said.

She said the county housing team “is focusing on reviewing applications and identifying eligible participants in the second year of the Workforce Gap Rental Assistance Program, which was funded by American Rescue Plan dollars to serve the community’s middle-income earners who are not eligible for other sources of housing assistance but are still hurting due to the impacts of the past few years.”

LaCoe said the team is developing additional housing programs, with program manager Theo McClammy working to find program models “that could meet the needs of our community and funding and leveraging opportunities.”

She said these programs are expected to be firmed up over the next six months “so they could go live in the county’s next fiscal year. And of course, this team will also be responsible for evaluating the success of programs and compliance monitoring to make sure we’re using these funds as effectively as possible.”

For Self, time is running out to untangle her personal situation. She’s been looking for something like a mother-in-law suite or garage apartment, and she can pay from $900 to about $1,300 per month.

“I’ve got my church looking,” Self said. “I just need a private landlord or a community that has more relaxed standards, because I understand they have to protect their investment and everything, but sometimes one-size-fits-all does not fit all.”