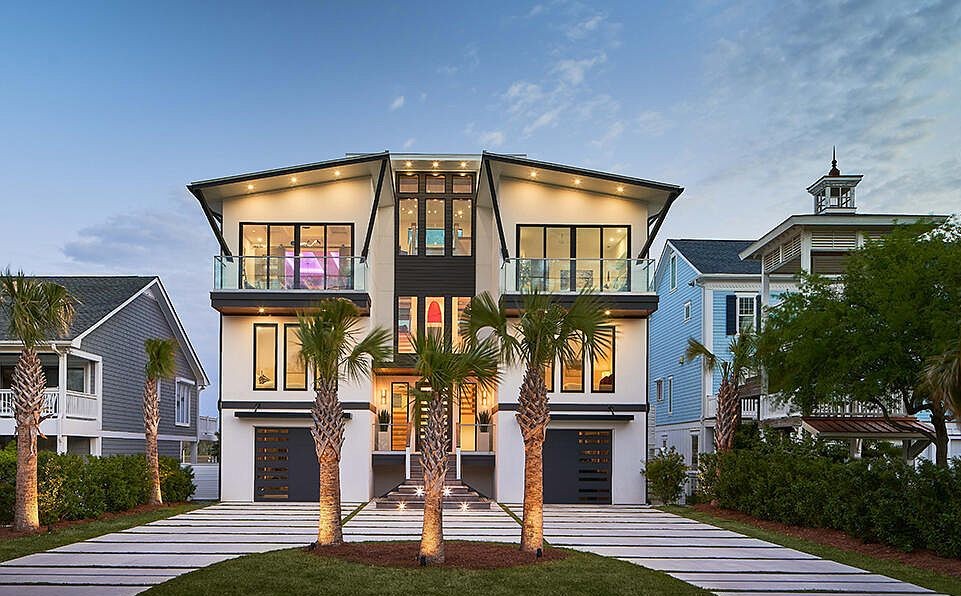 The home at 56 Pelican Drive in Wrightsville Beach sold in June for nearly $7.4 million. (Photo courtesy of Intracoastal Realty Corp.)
June marked another busy month for luxury home sales in the Wilmington area. Sales of homes priced at $1 million or more saw a big jump in year-to-year sales, according to a report by Wilmington-based Just For Buyers Realty.

In June, 73 luxury homes were purchased in New Hanover, Brunswick and Pender counties, an increase of 74% from June 2021 when 42 sold in the region.

"The luxury market in our region is still pumping pretty strong, despite national headlines indicating otherwise," said Trey Wallace, president of Wilmington-based Intracoastal Realty Corp., in an email Wednesday. "We have actually sold more luxury homes YTD vs. 2021. For home sales over $1M in New Hanover County the market is ahead in transactions by about 17% (170 vs 145 YTD)."

He said many different factors are having an impact on buyer sentiment, including Increased mortgage rates, fears of a recession, stock market corrections, lingering supply chain issues and the war in Ukraine.

"We did see a broader market slowdown the last couple of months, but luxury sales have not been impacted as much as other price points in this region," Wallace said. "Some of the larger metro markets have seen a decrease in luxury sales and that may eventually trickle down this way, as it normally does."

Last month’s sales had a combined volume of nearly $110 million, an increase of 70% from last June’s $64.6 million, the report stated. The figures are based on data recorded in the N.C. Regional Multiple Listing Service.

“Two years ago we were right in the middle of the worst days of the pandemic," said Scott Saxton, of Just For Buyers Realty. "Back then, with all the uncertainty, no one would have predicted that it would be the start of a luxury real estate boom. The fact that it started, let alone that is has extended for 25 months, is truly remarkable.”

The most expensive home purchased last month, for nearly $7.4 million, is located at 56 Pelican Drive on Wrightsville Beach. The five-bedroom, five-and-a-half bathroom property was on the market for only one week before it went under contract, according to the Just For Buyers report.

Real estate experts are paying attention to the increase in luxury inventory, according to the release. June became the first month during the current streak when each of the three counties experienced year-to-year increases in the number of luxury homes on the market, the release stated.

"We are seeing inventory increase slowly and some of these higher-priced homes are sitting on the market longer," Wallace said. "Something that was selling in a week or two may take a month or more, but that is normal. Agents will need to get more creative in marketing, and pricing will be more calculated. We need to level with all sellers that we will eventually return to pre-pandemic levels with respect to housing demand."

Saxton said that while more homes on the market means more options and a little more leverage for buyers, “the increase could be the first sign of things slowing down. We’ve recently seen interest rates increase, and typically when that happens sales start leveling off.”