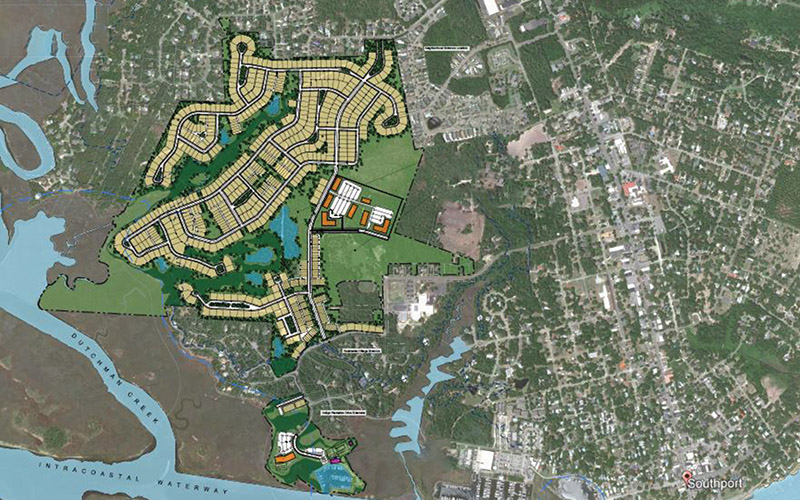 Earlier this year, East West and BHI Ltd. submitted a master plan and rezoning request for Project Indigo, also referred to as phase two of the area’s existing Indigo Plantation, to the city’s planning board, which was expected to meet June 16 to potentially make a recommendation about the project.

Ultimately, the rezoning would have to be granted by the Southport Board of Aldermen. In the meantime, residents have been expressing their concerns about the impact the development could have.

In a May interview for WilmingtonBiz Talk, developers discussed where the project stands.

The plan at that time was to continue to meet with the members of those subcommittees, which were broken down by the issues involved – traffic, infrastructure, environment and design and character.

Paul said the partners have been working with the city of Southport toward having the property annexed into the city.

In towns across the region, an increase in traffic that coincides with a growing population and new development inevitably comes up during rezoning discussions.

“Any time you talk about developing a piece of property that’s an infill site where development has already occurred all around, for people who live there and work in those environments, their No. 1 concern, their No. 2 concern and their No. 3 concern is always traffic,” said Roger Perry, president and founder of East West Partners, the firm that developed River Place in downtown Wilmington in a public-private partnership with the city.

Adding to his traffic statement during the talk, Perry said the developers are going to work on the mitigations necessary as identified in a traffic study. The fact of the matter is in the future Southport with or without Indigo is going to have traffic issues and traffic impacts that it must deal with. We’re not going to make those any worse.”

He said his development team on the contrary is working to make the situation better.

Residents have also expressed their concerns about the impact the development will have on the environment.

Perry has said a higher-density development like the one his team is proposing will affect less of the ecosystem than one that is much more spread out.

Paul said, “We’re going to follow what Roger has done for 50 years and what we’ve done for 40 years on Bald Head as well as the original Indigo Phase One – no mass-grading [of trees]. We’re not going to get into any of that stuff at all.”

Perry said his firm works to develop “new urban” communities, a planning term that includes the use of a mix of dwelling types “while preserving sensitive and important parts of the property from an environmental standpoint, us providing the open space and the community amenities that bring it together carefully as a neighborhood and try to weave it into the fabric and the character of the land in such a way that it’s a seamless development.”

He said with sensitive portions of the site along with open space the development plans require, more than 40% of the property “will remain in some kind of open space or public use. So there’s a great emphasis on creating a sense of neighborhood where people can socialize and enjoy and interact.”

With those socialization and interaction aims in mind, Perry said, “all of our streets will have sidewalks on both sides of the street … In addition to preserving as much of the existing tree canopy as possible, we’ll have unifying street tree elements on both sides of all streets. The majority of the homes will have functional usable front porches on them.”

The community will also have strict architectural guidelines, the developers said.

Project Indigo is expected to take at least 10 years to complete.