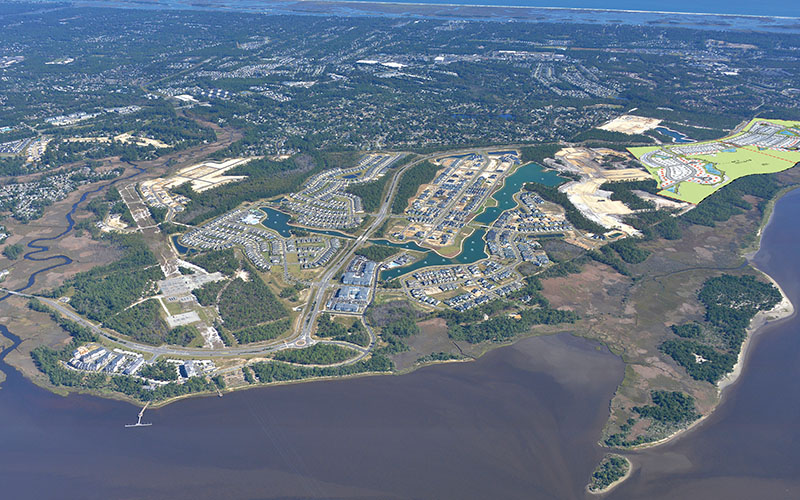 Even since then, Riverlights has continued to grow, with the latest phases of single-family home development in the 1,400-acre community opening up to buyers this summer.

As of early May, buyers had purchased nearly 800 homes in Riverlights, which is owned by a subsidiary of North America Sekisui House LLC and managed by Brookfield Properties. The master-planned community along River Road has more than 2,000 residents, not including the occupants of Oasis at Riverlights, an apartment complex with 250 units.

Built by Wilmington-based PBC Design + Build, the 52 townhomes next to existing commercial-residential hub in Riverlights, called Marina Village, are sold out, with the last selling for more than $700,000.

Residential phases 5 and 6 of the development are set to be released this year, officials said, and they represent the first significant property release for Riverlights since 2019. The phases include 360 new homesites.

Meanwhile, the Del Webb 55-and-older neighborhood in Riverlights is expected to be sold out by the end of this year.

“Del Webb has had a phenomenal five years at RiverLights,” said Nick Cassala, vice president of operations for Riverlights. “In the last couple of years, their product and offering has become even more popular, and anytime you get close to the end of a phase there typically is an increase in interest. They certainly have been managing that increase in interest over the last 12 to 18 months magnificently.” 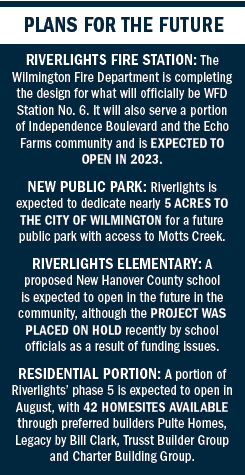 The residential growth in Riverlights is boosting efforts to recruit more commercial development.

“The story that we’re able to share with commercial developers today is much different than it was two or three years ago, and what’s different about it is we’re halfway through this development now with approximately five years remaining. We have hit a critical mass in population,” Cassala said. “We’re over 1,000 residences in Riverlights, and that number is going to be 2,000 before you know it. That becomes a really compelling story regarding a service area for retailers and even maybe potential office users.”

On May 6, the developers revealed some of their plans for 7Bridge, a 37-acre commercial village at Riverlights.

With parcels for retail, entertainment, service commercial and offices, 7Bridge is part of a larger 120-acre mixed-use village that will anchor the southern entrance to Riverlights with a variety of residential projects, including Argento, a luxury apartment community, and The Cottages, a single-family-for-rent neighborhood, according to a news release.

Argento at Riverlights, on River Road and Quigley Boulevard, is expected to bring 286 luxury apartments to the mixeduse village by 2024. Riverlights is already home to about 2,000 residents, not including those who reside at existing apartments in the community, officials said.

7Bridge was named for the seven lighthouses that guided ships to port during wartime.

“We are developing this as a pedestrian-friendly lifestyle and convenient commercial center that elevates the everyday for our Riverlights community and the surrounding area,” Cassala said. “This is the only site zoned for mixed-use development along River Road. The businesses that locate here will conceivably be serving up to 14,000 existing residences within a 3-mile radius.”

“You don’t have to get on the main roads to even get there, which is super convenient for people whether they’re driving or biking or taking a golf cart,” Merlo said. “It is such a fun place with Smoke on the Water and other businesses. It provides the opportunity to see the most beautiful sunsets in the world over the Cape Fear River.”