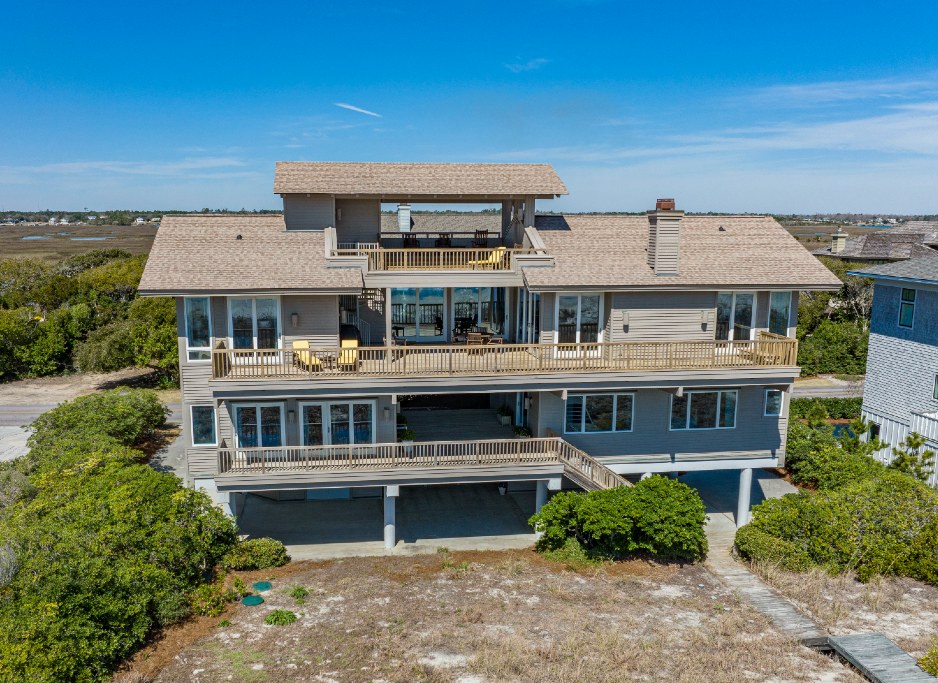 The home at 258 Beach Road N. on Figure Eight Island sold at the end of April for a record-setting price. (Photo courtesy of Intracoastal Realty Corp.)
The luxury home market in the Wilmington area reaching new heights has become commonplace in the past few years, and a recent sale broke the highest-price record again.

At the end of April, the oceanfront house at 258 Beach Road N. on Figure Eight Island sold for $6.75 million, according to a luxury real estate report by Wilmington-based Just For Buyers Realty. The previous record for the most expensive home sale ever recorded in the local MLS took place in November when a property on Wrightsville Beach sold for $6.42 million.

The 3,500-square-foot home at 258 Beach Road N., sold by The Carrington Company LLC to Martha S. and Charles M. Johnson, features five bedrooms and four-and-a-half bathrooms. According to the report, compiled from the N.C. Regional Multiple Listing Service for New Hanover, Brunswick and Pender counties, the home was on the market for only about a week before going under contract.

Buzzy Northen of Wilmington-based Intracoastal Realty Corp. listed the home and also represented the buyers. Northen said Tuesday that three significant property sales have taken place on Figure Eight Island in the past three weeks, including 258 Beach Road N. The other two were a record-breaking lot sale and the home at 62 Beach Road S. for $5.5 million.

"The prices will continue to go up with no inventory," Northen said. "The biggest issue that we're facing today at Figure Eight is that if someone decided to sell their house at a big price, they'll never be able to replace it. That's in the back of everybody's mind."

In other April trends, a record number of $1 million homes went under contract, and a sales streak that started in June 2020 continued, according to the Just For Buyers report.

April became the 23rd month in a row to experience an increase in year-to-year sales. Fifty luxury homes sold during the 30 days for a combined value of $86.5 million, the report stated. That compares to last year when 35 homes sold for a combined total of $58.5 million.

The report went on to say that offers were accepted on 84 luxury homes in April. Of these deals, a dozen sales closed by the end of the month, leaving 72 pending deals that could be finalized in the next 30 to 60 days, according to the report.

“With these numbers, I don’t think the end is anywhere in sight,” said Scott Saxton, of Just For Buyers Realty, in the report. “Some of the pending sales will fall through. There may be appraisal issues or problems with the inspections and buyers choosing to walk away … but that will likely only be a few of these deals. With the vast majority of the sales going through it is very likely that we will see records breaking all summer long.”