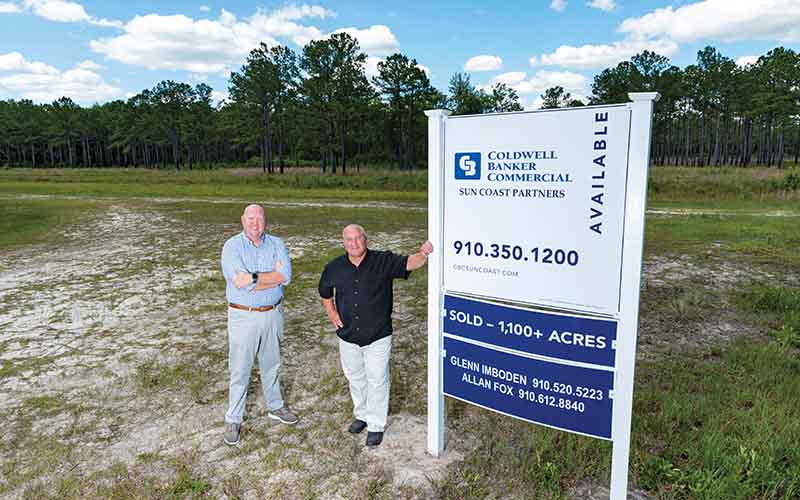 Allan Fox (left) and Glenn Imboden, commercial real estate brokers with Coldwell Banker Commercial Sun Coast Partners, were recently involved in the sale of more than 1,000 acres in southern Pender County. (Photo by Michael Cline Spencer)
Real estate brokers Glenn Imboden and Allan Fox know firsthand the growth that has emerged and is on the way in southern Pender County, particularly in an area just over the New Hanover County line.

“When I started in commercial real estate in 2012, I lived in Surf City, and still live in that area, and had to drive the commute to Wilmington,” Imboden said. “Porters Neck [in northern New Hanover] was starting to get filled up. The new NHRMC emergency room and Atlantic SurgiCenter were reasonably new in Scotts Hill, and I knew that a group of doctors owned all that land there and that it would be an area of future growth. When you drive past it twice a day, every day, you see things that others may not see initially.”

These days, present and future growth in southern Pender County is evident to most real estate professionals, residents and local officials as they anticipate how to accommodate expansion and the inevitable need for more infrastructure in Scotts Hill and nearby communities, including Hampstead.

“I think the demand being there is obviously the location,” said Fox, who along with Imboden is with Wilmington-based Coldwell Banker Commercial Sun Coast Partners. “You’re close to the Porters Neck area. You’re in the coastal part of Pender, which also gets you into Topsail school district, which I know is a highly sought-after place to be for education.”


In a major example of a growth factor, overcrowded schools could continue to impact some proposed Pender County development in the short-term.

According to a recent missive from the county’s planning staff recommending denial of a project’s zoning request, “the school system does not currently have the capacity to serve the proposed development, nor are there any plans currently adopted to increase capacity in the system at this time.”

The statement refers to a Wilmington-based developer’s request for a conditional zoning map amendment for a mixed-use project on about 20 acres on the east side of U.S. 17 across from Christian Chapel Road.

Being able to keep up with the pace of school enrollment is a big issue for Pender, officials said.

“We’re over 10,000 students in our school system in Pender County now, and it continues to outpace our physical facilities so we’re continuing to look for land and we will be building schools as needed as indicated by the board of education,” said David Piepmeyer, a Republican who represents south Hampstead and Scotts Hill on the Pender County Board of Commissioners.

A bond referendum could be in the county’s future, and new facilities could be situated on land in and around Scotts Hill that was recently purchased by Wilmington-based McAdams Homes, in a more than 1,000-acre deal where the seller was represented by Imboden and Fox.

Adam Sosne, who owns McAdams Homes with Joe McKinney, said in June in a story about the 1,000-acre deal, “We have spoken to Pender County about potentially helping them with their future needs, whether or not that’s a school or school sites.”


Schools aren’t the only issue facing southern Pender County when it comes to growth challenges.

“We are transitioning from a rural, agricultural county into a more urbanized county even though we don’t really have a major metropolitan area,” Piepmeyer said. “But we have people living in close proximity to one another and that has growing pains associated with it too.”

In another area of need, supplying the growing demand for health care in the Scotts Hill area, which is in both northern New Hanover and southern Pender counties, is getting a major boost.

Construction is expected to begin in 2022, with an opening around 2024, a news release stated.

The new facility will be on the same site as the NHRMC Emergency Department-North, an existing free-standing emergency department and surgical center.


More amenities, along with housing types, are on the way to Scotts Hill.

Plans for commercial and residential development by Wilmington-based Trask Land Co. are moving ahead on a 100-acre section of Blake Farm in Scotts Hill.

A dispute between Trask and its former partner in the Blake Farm development, which at one time had involved a total of 1,300 acres, was recently settled out of court, said Raiford Trask III, president of Trask Land Co.

The other development partner involved, NDCO LLC, is now currently the sole owner of 1,164 acres of the Blake Farm site, Trask said.

Efforts to reach a representative of NDCO to comment on this story were not successful as of press time, and Trask did not disclose the details of the settlement.

For the remaining Trask Land acres, a self-storage project built there is about to be followed by another. Additionally, Trask Land and its multifamily partner, Chaucer Creek Capital, are working on a 240- unit market-rate apartment complex, The Reserve at Blake Farm is expected to go vertical this summer, Trask said.

Chaucer Creek is also Trask’s partner on 136 townhomes on the property.

“Southeastern Pender County has a really good school system, favorable tax rates compared to New Hanover, and it’s a vibrant community on the growth path with a high quality of life,” Trask said.

At the front of the Scotts Hill land along U.S. 17, Trask Land is developing a 12,000-square-foot commercial building that is expected to include restaurants owned by popular names in the industry, Trask said.

Another aspect of the commercial space, he said: “We’ll have an outdoor music venue to go with it.” 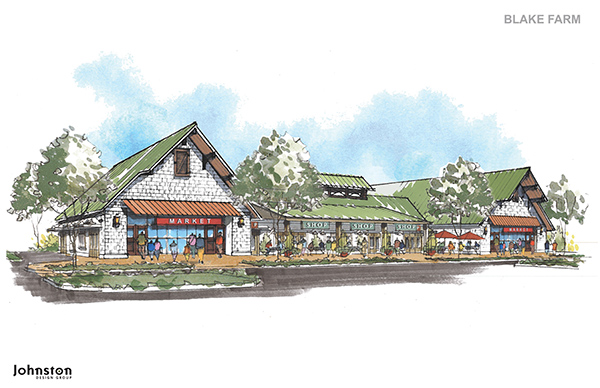 
In recent years, Imboden and Fox have marketed several different pieces of land in the Scotts Hill area to developers, representing some large landowners.

In one of their most recent deals, Wilmington-based McAdams Homes and partners bought 612 acres on Island Creek Road for $5.8 million and 411 acres on Sidbury Road in Scotts Hill for $6 million.

“The last thing you want to do is just dump a bunch of lots all at one time and have it be all the same,” Sosne said. “Our investments were geared toward, on those two tracks specifically, more of a longer-term approach.

“We want to see how things progress, where the needs are, and obviously market conditions and what the market dictates. And then we’ll put our plan together from there.”

Sosne has said he envisions his company building up to 5,000 homes in southern Pender County over the next decade.

The plan for the latest purchases could include a large master-planned development like what had been in the works for neighboring Blake Farm land.

But for now, for McAdams Homes’ holdings in Scotts Hill, the firm is focusing on Silo Ridge, a 75-acre community with 315 lots for homes and townhomes. Silo Ridge is about a quarter mile from U.S. 17 on Sidbury Road, also next to the Blake Farm site.

Sosne said he expects to break ground on Silo Ridge in the fourth quarter of this year and start building homes in the first quarter of next year.

Piepmeyer said there are numerous reasons why southern Pender County and the county itself is popular among potential residents and developers.

“Most of the people that we have coming here to live probably vacationed here and their kids grew up on the Topsail beaches a week or two weeks out of the year at a time and so it’s a good lifestyle,” he said. “But we’re also a bedroom community for New Hanover County and Onslow County,” he said.