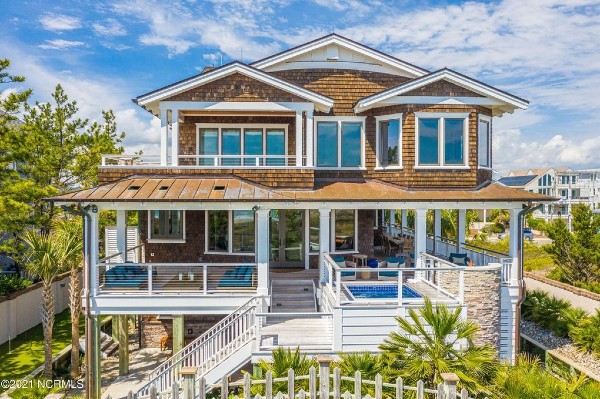 The latest sale price for the home at 915 S. Lumina Ave., which sold May 10, also represented a $1.4 million increase from its last sale in July 2019, according to a luxury market report by Wilmington-based Just For Buyers Realty. The report is compiled from the N.C. Regional Multiple Listing Service.

Lumina Place LLC is managed by Gregory A. Moore, according to state records, with Moore's address listed as a P.O. box in Cary.

Explaining the house’s price increase since 2019, Young said, “The seller had made some improvements, and the market went up. Supply’s down and demand is up, and so anytime that happens that pushes prices up. We had multiple bids on that, both from local buyers.”

“It was built by Chambliss & Rabil [in 2014], and it’s nothing short of a masterpiece in the quality of construction,” Cofer said of the 5,570-square-foot home, which has four bedrooms and six bathrooms.

Young said the home is on a lot and a half.

“The lot has more frontage than the traditional Wrightsville Beach lot, and it has wonderful views west looking out the backside of the inlet towards the waterway and the sunsets,” Young said. “That was really unique to be able to have east-facing views over the ocean but also sunset views over the water looking west.”

The record-breaking New Hanover County sale is another sign of how the area’s luxury market continues to thrive.

“Not only did the home set a new record for the county, the sales price was $150,000 more than the asking price,” said Kathleen Baylies, broker in charge at Just For Buyers Realty, in the firm’s luxury market report for May. “It’s a situation we’re seeing more and more frequently. So far this year, almost 30% of the high-end homes have sold at or above the listing price. Compare that to 18% for the same time period last year and 8% for the first five months of 2019.”

Part of the reason for the local boom is the pandemic.

“COVID has pushed a lot of people obviously out of the higher-density cities but it’s also pushed the mindset of people who have been sitting on the fence,” including those who were just in the contemplation phase when it came to retirement or buying a second home, Young said.

The 915 S. Lumina Ave. home was one of 71 luxury properties in the tri-county area to sell in May, according to the Just For Buyers Realty report, which compiles data for homes in New Hanover, Brunswick and Pender counties selling for $1 million or more. The report does not cover off-market sales, which may have higher prices.

The number of homes sold in May also broke a record set in March when 52 luxury homes sold, according to the report.

A total of 38 high-end homes sold in New Hanover County for a collective $65.7 million, the report stated. Another 27 luxury properties sold in Brunswick County for $36 million. In Pender County, six luxury homes sold for $8.7 million.