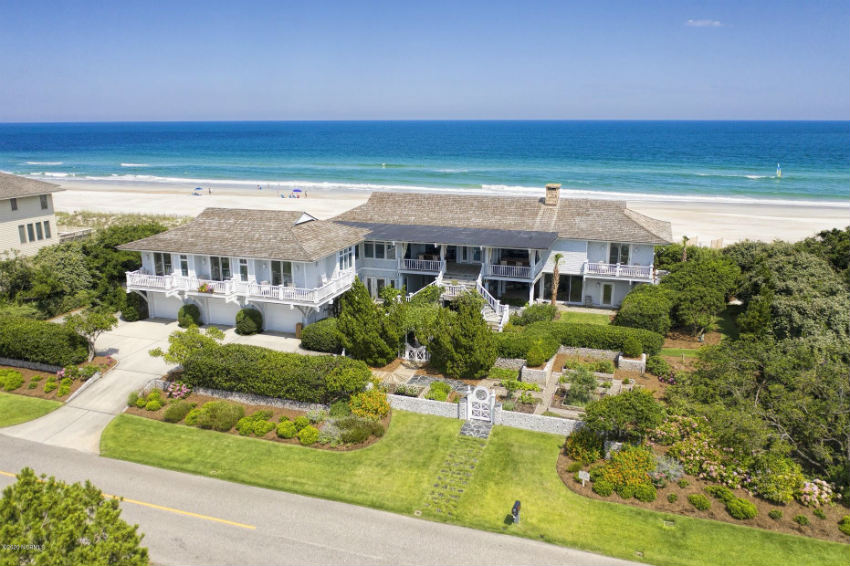 The $5.5 million sale of the home at 142 Beach Road South on Figure Eight Island is the highest-price sale ever recorded in the local multiple listing service. (Photo courtesy of Intracoastal Realty)

Not long after a 2005 sale price for a luxury home in the area was topped, another, higher-priced home sold in New Hanover County.

The seller was a Gorham family trust, and the buyer was 142 Beach Road South Property Trust, according to a New Hanover County deed. The sale was recorded Monday.

The 5,800-square-foot home has seven bedrooms and seven full bathrooms.

"Rare chance to own a double lot oceanfront home on the south end of Figure Eight Island with ocean views from almost every room," the home's listing stated. "The grand open floor plan is perfect for entertaining including multiple outdoor living options overlooking the home's gardens. The gourmet kitchen is complete with Viking stove and oven. Not included in total square footage is a separate guest quarter consisting of a bedroom, full bath and exercise/flex room."

The area's luxury home market has been experiencing records throughout the summer.

"There were four houses for sale Aug. 1 at $5 million [or more]; by Sept. 1 all of them were under contract," said Buzzy Northen of Intracoastal Realty, who was the listing agent for 142 Beach Road South.

He added, "Inventory is tighter than it's ever been in the history of Figure Eight," as well as other luxury locales.

The Figure Eight sale beats the record set in September for the most expensive ever recorded.

On Sept. 16, the home at 1625 Futch Creek Road sold for $5.277 million, edging out an August 2005 sale of a home and marina near Middle Sound Loop Road that went for $5.264 million, according to a Just For Buyers Realty report on September luxury home sales.

"The deal was just one during a month that saw each of the three area counties outperform the marks from last year," the report stated. "In New Hanover County, 22 homes with a price of $1 million or more sold for a collective value of $43.2 million.

In addition to the sales that closed, another 50 luxury homes went under contract in September, according to the report.

“That is a huge number, and it’s part of a larger trend” said Kathleen Baylies, broker in charge of Just For Buyers Realty, in the report. “Since June, 210 luxury properties have gone under contract and that is far and away our best summer ever.”