A rendering shows what Sidbury Landing apartments are expected to look like. (Rendering courtesy of Cindee Wolf)
A new apartment community is in the works on a site along Sidbury Road.

Sidbury Landing, which would include 288 apartments, would be bordered by Interstate 40, Sidbury Road and Old Dairy Road.

While the plans are preliminary, and wouldn't be submitted to New Hanover County until July, "we do believe this is a great part of the county to expand into," said Cindee Wolf of Design Solutions, who represents developer HH-Multi, a subsidiary of H&H Homes.

The Class A, upscale, market-rate apartments would be in three-story buildings, Wolf said in an email Wednesday. 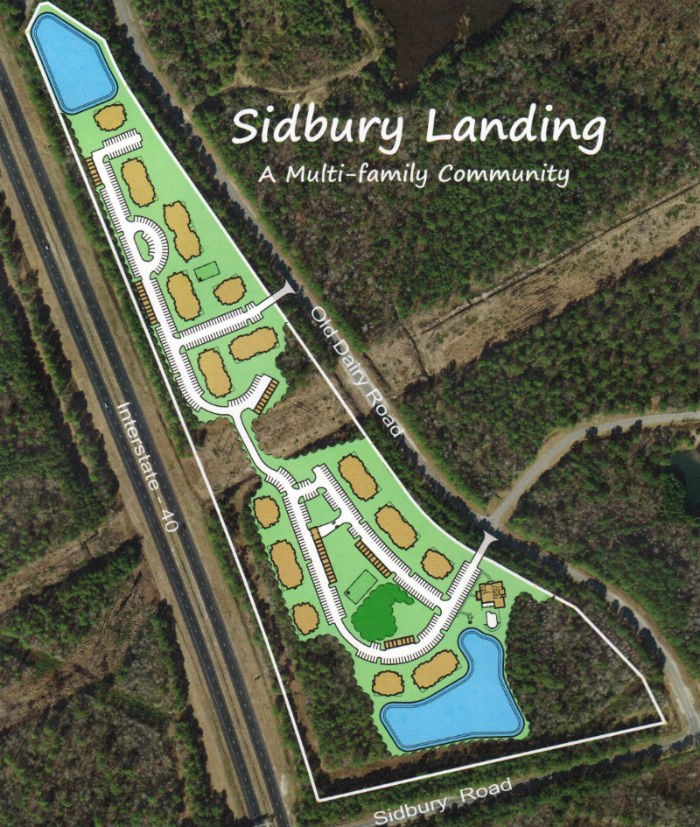 The Sidbury Landing plan is expected to include a clubhouse and pool, other recreational amenity areas and rentable garages. Water and sanitary sewer services would be connected to the Cape Fear Public Utility Authority system.

The site would need a conditional zoning district designation from the county, according to a community information notice to adjacent property owners from Wolf.

The county requires that the developer notify those property owners and hold a meeting for any and all interested parties to explain the project and answer questions before submitting a request for a conditional zoning district, Wolf explained in the letter.

But because of the coronavirus pandemic, a meeting can't be held at this time, Wolf stated. In lieu of an in-person session, Wolf said she can be contacted at 620‐2374 or [email protected].

"We can also set up an on-line meeting for a forum with multiple parties if requested. Please let me know if you are interested in that alternative and arrangements will be made," Wolf stated in the letter. "All contact, comments, concerns, and recommendations must be recorded in a report delivered to the county along with a rezoning application."

According to Wolf, a conditional zoning district means that only the use, structures and layout of an approved proposal can be developed on a site.