In New Hampstead Neighborhood, $15M In Lots Under Contract 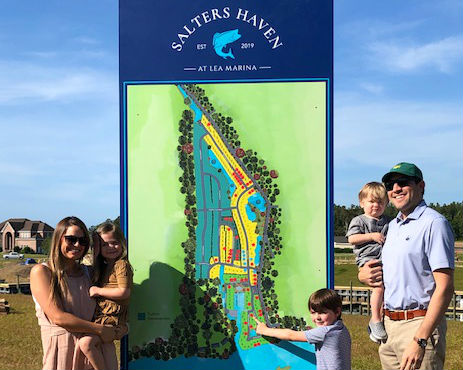 A reinvented sales event May 9-19 for Salters Haven in Hampstead resulted in 75 lots going under contract. (Photo courtesy of Destination Realty Corp.)
Those marketing a new neighborhood along the Intracoastal Waterway in Hampstead had to scrap a planned four-day sales pitch because of the coronavirus pandemic.

But a pivot they came up with seemed to work for Salters Haven at Lea Marina, a Logan Developers project where 75, more than $15 million worth, of its more than 300 lots are now under contract, Realtors said.

Craig Wheeler, president of Wilmington-based Destination Realty Corp., Andy Garrett, vice president of sales and marketing, and the rest of the firm's team were used to planning shindigs that hosted large numbers of potential homebuyers.

"They scrapped the big events in favor of a more virtual, intimate feel. Large groups were now just couples," according to a Destination Realty news release. "There were no large tents to accommodate a lunch buffet for 150 people. Instead, they used one tent for guest registration and everything else was done outside with no handshakes to commemorate a deal."

Wheeler stated in the release, “We literally had to take an event with 150 couples scheduled to attend on April 24 and recreate how we could handle that in two weeks.

Additionally, more than 50 couples from out-of-state plan to visit when their local restrictions are lifted, he said.

Homesite prices at Salters Haven, 25 Factory Road, range from $99,000 for interiors to $850,000 for waterfront property, the release stated.

P.J. Kelly, vice president of Logan Developers, said Thursday that six model homes are under construction in Salters Haven, and the lots under contract are expected to close soon.

"We're lining up the closings now and in the next 30 to 45 days, we’ll be closing them and moving on to the next ones," Kelly said.

Salters Haven will ultimately feature more than 300 homesites, a 75-slip marina, a clubhouse overlooking the Intracoastal Waterway, a resort-style pool area and a variety of other amenities, the release stated.

Most of the buyers during the May tours are local to the Cape Fear region, Kelly said.

As for the reasons for the success of Salters Haven so far, Kelly said "I think a lot of people love the community because of the proximity to the water and what it offers and I think people are taking advantage of interest rates."