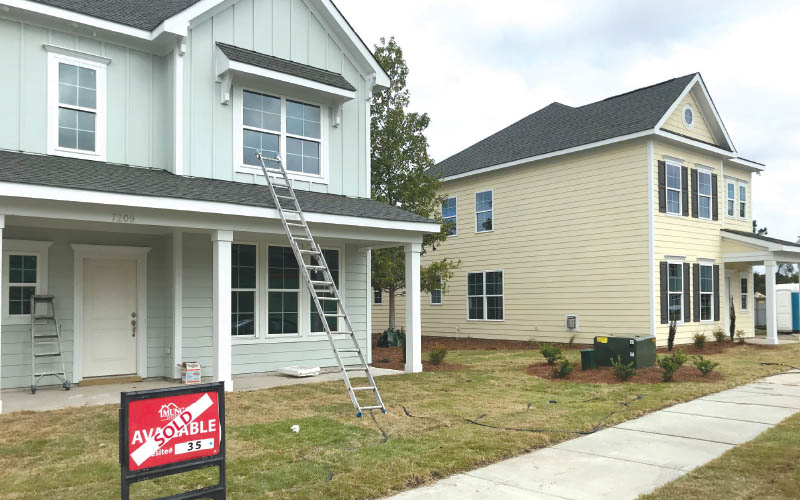 Houses are under construction at Middle Sound Village by Mungo Homes, a neighborhood in Ogden marketed by Wilmington-based Coldwell Banker Sea Coast Advantage. (Photo by Cece Nunn)
As companies continue to build houses in Wilmington, supply lags demand for new home construction locally and throughout the U.S.

Housing market professionals say there’s a variety of reasons for that. For one thing, it’s taking more time to finish houses in some parts of the Cape Fear region.

“Our biggest day-to-day challenge is just the ability to get the homes completed in a timely fashion. There’s high demand, rates are good, the market’s good,” said Brad Hunter, vice president for new home sales at Wilmington-based residential real estate firm Coldwell Banker Sea Coast Advantage. “It’s a different challenge now because we don’t have as many houses on the ground to offer buyers.”

He said it used to take about four months to build a home, but now that timeline is six or seven months.

“When the family comes in and needs a home, they may not have time to wait,” Hunter said. “And so if you don’t have inventory [of new homes] on the ground, it may force people into the resale market just because they need a home.”

Cameron Moore, executive officer for the Wilmington-Cape Fear Home Builders Association, said one of the main reasons for the longer new-home timeline is the labor force. Construction and many other industries are experiencing a shortage of workers, and it can be difficult to schedule those workers when homebuilders do have a full roster, he said. That’s because those particular employees, especially in the skilled trades, are likely working on more than one house, Moore said.

“You’ve got a lot of pent-up demand, a lot of folks still moving to our area,” Moore said. “The challenge that we still face is what we’ve been facing, really for the last five years coming out of the recession: trying to meet that demand, putting residential lots on the ground.”


What about a slowdown?


A topic of conversation in nearly every industry is when an economic slowdown might hit the U.S. and the region. It’s been more than 10 years since the Great Recession, and some of the conditions that signal a slowdown are now in place, including low unemployment rates.

“I think the baffling part about this economic expansion is how long it’s lasted,” Moore said. “It’s lasted a lot longer than any of the economists thought it was going to last.”

From a real estate standpoint, Tim Milam is an optimist. The president of Coldwell Banker Sea Coast Advantage, he said he believes the housing market, which has been growing even with Hurricane Florence providing an interruption in September last year, will remain strong.

“I really do believe our market’s going to be good for a number of years. I really do. The only thing I worry about is next year” because it’s an election year, Milam said.

He said, “We might see a sort of pause in the market during that time.”

His company, which is active in the tri-county area as well as Onslow County, already counted a sales volume $200 million higher in October than the same time last year, growing from $1.3 billion to $1.5 billion.

Hunter said unlike during the recession, the area is experiencing a production deficit for new homes. In 2008, he said, there was an overabundance of homes. “You had many more investor-driven sales in that environment, meaning anybody and everybody was buying a house . . . But you just don’t have the speculative buyers in the market like we did years ago.”

Sales continue to be driven in part by retirees or preretirement baby boomers who see the Wilmington area as a better value. Would-be buyers still tell local Realtors at home shows that they want to get away from the high taxes they pay in parts of the Northeast, Hunter said.


A look at the data


Earlier in October, housing market analyst Edsel Charles’ research for the month of September told him that only one house is expected to be for sale in the $275,000 to $325,000 price range in the Monkey Junction/Masonboro portion of New Hanover County eight months from now.

The conclusion was one of those included on his list for parts of the North Carolina and South Carolina coast titled, “Top 10 Places to Build a New Home 8 months From Now.” The price point and area has a 12-month demand of 213 and a ranking of No. 4.

Charles, founder and chairman of the board of directors for MarketGraphics Research Group Inc., shared some of his company’s area research during the Cape Fear Area Economic & Housing Forecast presented by his firm earlier this month in Wilmington at The Terraces on Sir Tyler.

Also speaking was Matt Martin, regional executive at the Federal Reserve Bank of Richmond. Martin is based in Charlotte and leads the bank’s outreach efforts across North Carolina and South Carolina.

A projected shortage of lots in MG’s region of research that includes New Hanover, Brunswick and Pender counties needs to be addressed, according to Charles’ report. The region comprises six other counties.

The report’s insights for September this year also included: “You have to be careful where you’re going to put some stuff, but there’s all kinds of places that we’re short of lots,” Charles told his audience Oct. 4.

He added later, “There’s opportunity to build houses in the right places. There’s demand that is coming.”