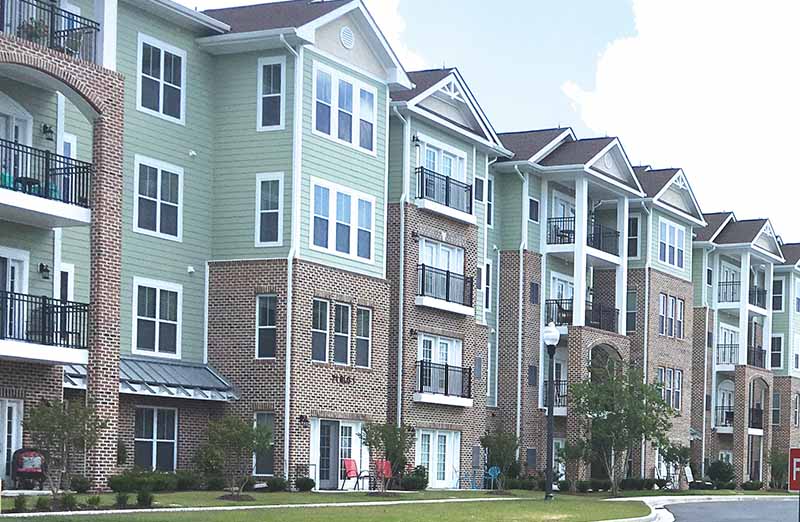 Rebekah Roth, senior planner for New Hanover County, used the example of Cambridge Village (pictured above), to illustrate what could be possible in one of the new New Hanover County zoning districts. Photo by Cece Nunn 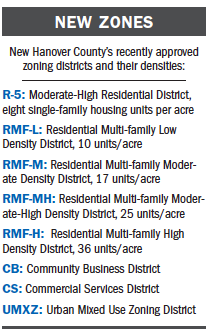 For at least one potential apartment project, things might have been different if New Hanover County’s new zoning districts had already been in place.

But earlier this month, Hill Rogers had to go with his gut.

He said he felt there was just too much uncertainty, too much lack of communication when it came to an apartment project for which his company, Cameron Management, was pursuing a rezoning and special use permit from the county.

Earlier this month, he withdrew the application, which involved a proposed 324-unit apartment development off South College Road known as The Timbers at Whiskey Branch.

Now that county officials have adopted five new residential zoning districts that allow for a range of densities, The Timbers at Whiskey Branch project could be one of the first to try to use one of the new designations.

“We definitely want to revisit it and come back under one of these new zoning districts,” Rogers said, “and avoid having to have a special use permit, which prevented us from having any dialogue with the commissioners.”


It wasn’t an unusual scene for New Hanover County or any other growing area in the U.S.: In June, some nearby residents attended a county planning board meeting to voice their opposition to The Timbers at Whiskey Branch apartment project. Several months before that, in January, someone had created a Facebook page titled, “Stop Whiskey Branch Apartments.”

Despite some opposition, the planning board recommended approval of the rezoning in a 4-3 vote in June and the special use permit in a 7-0 vote.

But because considering a special use permit requires a quasi-judicial process, the developers were not allowed to talk to elected officials about the project before a final vote.

Rogers said the withdrawal gives his firm time to reassess.

“Time is critical and time is money, and I would have preferred not to withdraw,” Rogers said, “but taking a full, complete view, it seemed like discretion was the better part of valor.”

Meanwhile, the apartment occupancy rate remains high in the Cape Fear region, which means demand is high and developers could continue to look for ways to provide more supply.


The new zoning districts aim to alleviate some of the challenges developers and residents face when it comes to growth in the county, officials said recently, while providing a quicker update to the county’s nearly 50-year-old code in advance of completing a process to create a Unified Development Ordinance.

The hope is that “for the residents nearby, for the business owners, that it provides enough comfort, that you have flexibility to work with the market, and protections if you live behind it to know what to expect,” said Wayne Clark, county planning director.

“We’re so small geographically, and so close together … there are areas where you can’t really tell what’s the city or county right now … And so why have a completely different process for people based on a few hundred yards of difference in geography?” Clark said.

It’s important, said Clark and Rebekah Roth, senior planner for the county, not to block the potential for innovative development.

“We want to make sure that we are not the things that are getting in people’s way from being able to do projects that they want to do because we make it really hard for them to get there,” Roth said. “Especially if it’s not something where what we require them to do is really providing a lot of value for the public. If we were thinking that we were creating much better projects as a result of this [the zoning rules without recent changes], it would be another story, but that’s not what we’ve seen on the ground.”

The Wilmington area’s demographics are changing, he said, “and our housing types are changing. We are obviously running out of land, but at the end of the day, too, we have more and more folks moving here and living here.”

As to whether builders and developers are able to make use of the new zoning districts, that will depend on whether elected officials allow it.

“From a development standpoint and a building standpoint, we looked at these as a very good starting point,” Moore said, “a lot of good tools in the toolbox.”

Read more about the commercial zones in the Aug. 2 issue of the Greater Wilmington Business Journal.