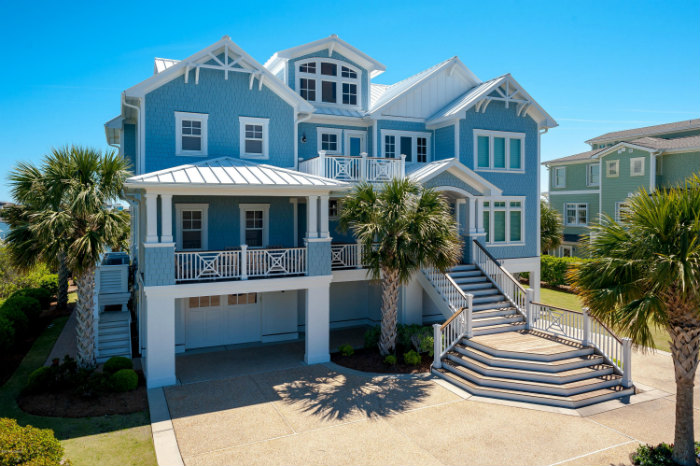 The house at 122 Parmele Blvd. in Wrightsville Beach went under contract in May. It has an asking price of nearly $5 million. (Photo from N.C. Regional MLS)
The luxury real estate market in the Wilmington area set records last month, according to a recent report.

It was the best May ever recorded in terms of home sales, with 14 dwellings priced at $1 million or more sold in New Hanover County for a combined value of $26.5 million, according to the report, presented by Doug Wahl, marketing director at Wilmington-based Just For Buyers Realty.

"That beats a record that was set in 2017 when 14 homes sold for a total of $22 million," stated the report, which was compiled using numbers from the N.C. Regional Multiple Listing Service.

Among the 14 closings were two homes that had price tags above the $4 million dollar mark, the report stated. They included the highest sale of the year so far, the house at 49 Pipers Neck Road on Figure Eight Island for $4.8 million.

Also closing recently was 213 S. Lumina Avenue in Wrightsville Beach, for $4.085 million, the report said. It's a 5,600-square-foot oceanfront property with eight bedrooms and eight bathrooms.

“In August 2017 there two $4 million dollars properties closed in the same month,” said Kathleen Baylies, broker in charge at Just For Buyers Realty, in the release. “But it’s more typical to just see about two a year. So two a month is unusual.”

According to the report, 15 luxury properties went under contract in May.

"They include 122 Parmele Blvd. in Wrightsville Beach which was only on the market one week. The home is just under  5,550 square feet with five bedrooms and six baths," the report stated. "If the contract price is near the asking price [of $4.995 million] it could be the most expensive home to sell in the county so far this year."

The other two counties in the tri-county region also had stronger months this May than the same period last year. In Brunswick County, four homes sold for a combined value of $5.1 million, with another three luxury homes going under contract.  In Pender County, three homes sold for a combined total of $3.9 million, with an additional home going under contract, according to the report.